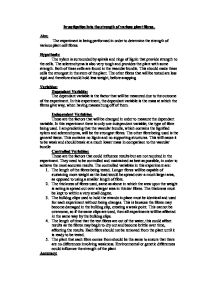 Investigation into the strength of various plant fibres.

Investigation into the strength of various plant fibres. Aim: The experiment is being performed in order to determine the strength of various plant cell fibres. Hypothesis: The xylem is surrounded by spirals and rings of lignin that provide strength to the cells. The sclerenchyma is also very tough and provides the plant with some strength. Both of these cells are found in the vascular bundle. This should make these cells the strongest in the stem of the plant. The other fibres that will be tested are less rigid and therefore should hold less weight, before snapping Variables: Dependant Variable: The dependant variable is the factor that will be measured due to the outcome of the experiment. In this experiment, the dependant variable is the mass at which the fibres give way, when having masses hung off of them. Independent Variables: These are the factors that will be changed in order to measure the dependant variable. In this experiment there is only one independent variable; the type of fibre being used. I am predicting that the vascular bundle, which contains the lignified xylem and sclerenchyma, will be the strongest fibres. ...read more.

Environmental or genetic differences could influence the strength of the plant Accuracy: In the interests of accuracy, all experiments should be performed 3 times and an average taken from them. In order to maintain a larger degree of accuracy, the controlled variables must be observed and maintained. If this is not achieved, the results may be compromised and therefore invalid, preventing me from getting any realistic conclusion from the data. Apparatus: * clamp stand (x2) * Boss (x2) * Clamp (x2) * Bulldog clips (x2) * Bunch of celery (quantity required will vary with different experiments) * Set of masses (0-10g and 10-100g) * Tile * Razor blade * Ruler * Forceps Method: 1. Set up the apparatus as shown above. 2. Cut a length of the desired fibre from the celery stem. (this could be the xylem, schlerenchyma or entire vascular bundle) ensuring that all strands are the same length and width. 3. Place on end of the fibre in the bulldog clip on one of the clamps and the other end in the other clip (ensure that no extra pressure is exerted onto the fibre through the bulldog clip as this may cause more damage. ...read more.