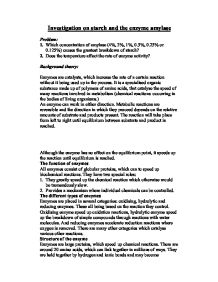 Investigation on starch and the enzyme amylase.

Investigation on starch and the enzyme amylase Problem: 1. Which concentration of amylase (4%, 2%, 1%, 0.5%, 0.25% or 0.125%) causes the greatest breakdown of starch? 2. Does the temperature affect the rate of enzyme activity? Background theory: Enzymes are catalysts, which increase the rate of a certain reaction without it being used up in the process. It is a specialised organic substance made up of polymers of amino acids, that catalyse the speed of many reactions involved in metabolism (chemical reactions occurring in the bodies of living organisms.) An enzyme can work in either direction. Metabolic reactions are reversible and the direction in which they proceed depends on the relative amounts of substrate and products present. The reaction will take place from left to right until equilibrium between substrate and product is reached. Although the enzyme has no effect on the equilibrium point, it speeds up the reaction until equilibrium is reached. The function of enzymes All enzymes consist of globular proteins, which can to speed up biochemical reactions. They have two special roles: 1. They greatly speed up the chemical reaction which otherwise would be tremendously slow. 2. Provides a mechanism where individual chemicals can be controlled. The different types of enzymes Enzymes are placed in several categories: oxidising, hydrolytic and reducing enzymes. These all being based on the reaction they control. Oxidising enzyme speed up oxidation reactions, hydrolytic enzyme speed up the breakdown of simple compounds through reactions with water molecules. And reducing enzymes accelerate reduction reactions where oxygen is removed. There are many other categories which catalyse various other reactions. Structure of the enzyme Enzymes are large proteins, which speed up chemical reactions. There are around 20 amino acids, which can link together in millions of ways. They are held together by hydrogen and ionic bonds and may become denatured if the bonds are broken. They have a globular structure, which consist of one or more polypeptide chains that turn and fold. ...read more.

The petri dish had to be tilted; this ensuring the whole surface area of the starch agar plate had been covered. The lid was closed slowly and rings of discoloration appeared on the jelly. To record the data, transparent paper was placed on the lid of the petri dish and the zones which showed the breakdown of starch were drawn with a permanent ink pen. The data was recorded and the area of enzyme activity was measured on mm graph square paper. The technician then disposed of the starch agar plates, as they were no longer needed. Experiment 2: To start of this experiment four petri dishes were needed. The lid was slowly opened and three holes were removed from the petri dish using a 10mm cork borer and tweezers for extra support. To each hole, 2% amylase was added using a pipette, making sure no enzyme concentration over flowed and that the hole was filled to the top, this preventing any errors. This process was repeated till all four agar plates contained 2% amylase. The lids on the petri dishes were closed gently and two were taken to the fridge and another two were kept at room temperature. Thermometers were also placed with the petri dishes, this allowing me to know the exact temperature at which the agar plates were preserved at. The following day the two petri dishes were taken out the fridge and placed on the desk. The lid was slowly lifted and was flooded with iodine. The petri dishes needed to be tilted; this ensuring the starch plate was totally flooded. The lid was gently closed and using permanent pen the enzyme activity was recorded on transparent paper. Using the thermometer I measured the temperature at which the petri dishes were kept at. This same procedure was used with the petri dishes, which were kept at room temperature. The area of enzyme activity on the transparent paper were counted on mm square graph paper, this allowing the results to be compared. The agar plates were then disposed of by the technician. ...read more.