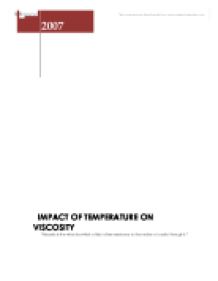 Investigation to determine the viscosity of glycerol.

Is viscosity affected by temperature? When temperature increases does viscosity decrease or increase and if it does are the changes systematic or random? These are the questions I investigate in this experiment.

“A body immersed in a fluid (totally or partially) experiences an upthrust (i.e. an apparent loss of weight) which is equal to the weight of fluid displaced.” [1]Ships don’t sink in water because of upthrust. Upthrust is also the cause for weight loss when a body is partially or wholly immersed in a fluid.

“Viscosity is the virtue by which a fluid offers a resistance to the motion through it of any solid body.”[2]

During my experiment I obtained the following results

These results prove my hypothesis.

To find the density of the ball we use the formulae:

From the above calculation we have already determined the mass and the volume of the ball. Therefore density of ball =

During my experiment the following were the various values for upthrust

In the planning section of this report I had said that

So far I have found the weight of the ball bearing and upthrust. I now need to find the viscosity of glycerol at different temperatures.

In this document I have reported on an experiment that investigated the relationship between temperature and viscosity. In it I have: