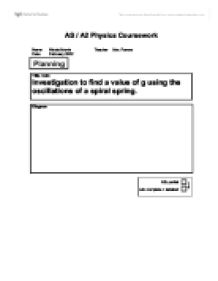 Investigation to find a value of g using the oscillations of a spiral spring.

AS / A2 Physics Coursework Name Nicola Morris Teacher Mrs. Farrow Date February 2002 Title / Aim Investigation to find a value of g using the oscillations of a spiral spring. Diagram A2b partial A4c complete + labelled List of apparatus Clamp Stand and G clamp Metre Ruler (0-100 cm) +/- 0.1 cm Slotted mass and mass hanger (0-1kg added in 0.1kg masses) Stopwatch =/- 0.01 seconds Spiral Spring Fiducial Mark Blu-tack Pointer Flag A2d some A4d comprehensive A6d full specification Variables involved (constant and changing) There are two types of variable within my experiment - dependant and independent. In the static experiment, the load is independent, kg, and the extension is dependant, m. In the dynamic experiment, there is the time period, seconds, which is dependant, and the load, kg, which is independent. F=ke, if k is kept constant. If k is kept constant, then my graph will show a straight line through the origin. This shows that F ? extension. In my dynamic experiment, T 2 = 4? 2 m/k . This shows that again, if k is kept constant, my graph will be a straight line, and T 2 ? mass. To ensure that k is kept constant, I always used the same spring and same masses. My range of variables was so that, my mass didn't exceed 0.7kg, as from my preliminary experiments, I knew that this wouldn't exceed the elastic limit. ...read more.

This was to ensure that I was measuring my oscillations from the same point each time. With all my readings I took at least two, occasionally three repeat readings. When I had my mass hanger with the slotted number of masses on it, I would pull it slightly below the level of the fiducial mark and let it begin oscillating. When it had done a few oscillations, I began timing the time for 50 oscillations to happen. I began counting at zero. When I had all my results, I found an average time for each load, divided it by 50, to get the time for one oscillation, and then squared it. I graphed these results. With the gradients from both my dynamic and static experiments, I was able to work out a value of g. 1/gradient of static experiment x 10-1 x g = 4?2 x (1/gradient of dynamic experiment) My value of g should be around 9.81 Nkg -1, if my experiment is very accurate. A2a outline plan A4a detailed plan A6c logical sequence Safety considerations * Use of safety glasses, to protect eyes from the possibility of the spring snapping during the preliminary experiment to test the elastic limit. * Cushioned landing if loads fall, so they don't bounce. * Keeping feet out of the way, as falling loads may injure the feet. ...read more.

Then to achieve the formula for the dynamic experiment, squaring the formula for the time period, we get T 2 = 4?2 x (m/k). These two formulae can be put together to gain g. A8b OK Aspects of the plan based on predictions/secondary sources/preliminary work For my dynamic experiment, I chose to measure t 2 against mass, because I predicted that it would give me a straight line, because of the formula : t2 = 4?2 x (m/k) Because I know that 4?2 is a constant, and k is the spring constant, I can plot t2 against m, and it will give me a straight line. They are the variables. I used the preliminary experiment to set my range. I found out from this that I couldn't time oscillations with 0.1kg because they were too quite, and tended to swing from horizontally, which flawed the timings. I also knew not to add more than 0.7kg to the mass hanger, as from my preliminary experiment, anything more exceeded the elastic limit. I predict that my value for g will be around 9.8. I know that the universal value of g is 9.81 N kg-1 but I know that my value will not be as accurate as this as my equipment will induce errors. A8c (A2 only) OK Use of secondary sources or preliminary work I derived my formulae from Advanced Physics - Materials and Mechanics, T. Duncan. A8d (A2 only) OK ...read more.