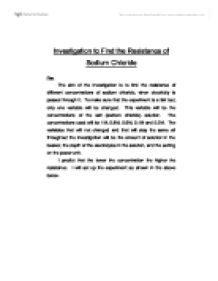 Investigation to Find the Resistance of Sodium Chloride

Investigation to Find the Resistance of Sodium Chloride Plan The aim of the investigation is to find the resistance of different concentrations of sodium chloride, when electricity is passed through it. To make sure that the experiment is a fair test, only one variable will be changed. This variable will be the concentrations of the salt (sodium chloride) solution. The concentrations used will be 1M, 0.8M, 0.6M, 0.4M and 0.2M. The variables that will not changed and that will stay the same all throughout the investigation will be the amount of solution in the beaker, the depth of the electrolytes in the solution, and the setting on the power unit. I predict that the lower the concentration the higher the resistance. I will set up the experiment as shown in the above below. By changing one input variable, I will work out what effect changing that variable will have on the resistance of the salt solution. ...read more.

Also, in order to keep it a fair test, the input voltage, the area of the electrodes and the distance between the two electrodes will remain the same throughout the entire experiment. Other variables that may have some affect will be kept the same too if possible such as temperature etc. using a voltmeter and an ammeter to find the current and the voltage I will use the following formula to work out the resistance of the salt solution at each different concentration: Ohm's law states that R = V I Method A beaker was filled with 100ml of a range of different concentrations of salt solutions. Two electrodes were attached to the minus and positive terminals of a low voltage power unit. An ammeter was wired in series and a voltmeter in parallel to measure the current and the voltage of the circuit could be measured, this could then lead to the resistance being calculated. ...read more.

As the concentration increased the resistance decreased. The results make a smooth curve, but there is one result that may be anonymous. It was the 0.6M result. It is circled in green on the graph. From the graph I can conclude that a solution with a low salt concentration has a high resistance, whereas a solution with a high salt concentration has a low resistance. Evaluation I believe that the experiment was fairly accurate. Care was taken to ensure that the correct amount of solution was added into the beaker, and that the electrodes were in the same positions in the electrolyte so that an equal was in contact with the electrolyte. There was 1 anonymous result, which was different to the others. It is circled in green on the graph. I repeated each reading 5 times, to ensure that a reliable result was recorded. This could have been increased to produce an even more reliable result. The results on the graph show a smooth curve. ...read more.