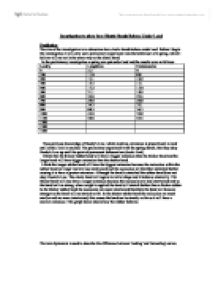 Investigation to show how Elastic Bands Behave Under Load.

Investigation to show how Elastic Bands Behave Under Load

In the preliminary investigation a spring was put under load and the results were as follows:

From previous knowledge of Hooke's Law, which explains, extension is proportional to load until elastic limit is reached. The preliminary experiment with the spring shows, that they obey Hooke's Law up until the point of permanent deformation (elastic limit).

We repeated our results on this band.

If I were to do the experiment again I would look at other materials to stretch such as copper, steel, rubber etc to see if any other materials obey Hooke’s Law. I could again look at different lengths and widths of other elastic bands.

I would also use accurate measuring equipment so that no errors occur and good, clear accurate results are obtained. The good results would present a clear idea of how elastic bands behave under load. Further experiments could be carried out, using different equipment to see if my conclusions are true that elastic bands do not obey Hooke’s Law.