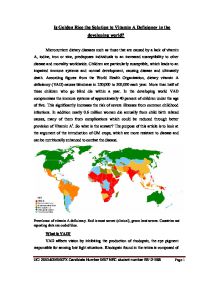 Is Golden Rice the Solution to Vitamin A Deficiency in the developing world? The purpose of this article is to look at the argument of the introduction of GM crops, which are more resistant to disease and can be nutritionally enhanced to combat the diseas

Is Golden Rice the Solution to Vitamin A Deficiency in the developing world? Micronutrient dietary diseases such as those that are caused by a lack of vitamin A, iodine, iron or zinc, predisposes individuals to an increased susceptibility to other disease and mortality worldwide. Children are particularly susceptible, which leads to an impaired immune systems and normal development, causing disease and ultimately death. According figures from the World Health Organization, dietary vitamin A deficiency (VAD) causes blindness in 250,000 to 500,000 each year. More than half of these children who go blind die within a year. In the developing world VAD compromises the immune systems of approximately 40 percent of children under the age of five. This significantly increases the risk of severe illnesses from common childhood infections. In addition nearly 0.6 million women die annually from child birth related causes, many of them from complications which could be reduced through better provision of Vitamin A1. So what is the answer? The purpose of this article is to look at the argument of the introduction of GM crops, which are more resistant to disease and can be nutritionally enhanced to combat the disease. Prevalence of vitamin A deficiency. Red is most severe (clinical), green least severe. Countries not reporting data are coded blue. ...read more.

The genes absorbed might be detrimental to the soil. An even bigger problem is that the genes will stay in the soil up to two years until the chemicals and DNA are washed away18. The biggest aspect of this problem is the horizontal gene flow; once the soil absorbs the DNA, the DNA cannot be taken out again. This of course can cause contamination to all of the crops whether they are normal or genetically modified19. However there are ways to prevent such contamination these include further modification of the rice crop. These include inserting further genes that alter the way in which the crop breeds. One such example is to change the time of year at which the plant produced pollen (or lack of production). This means that any subsequent pollen produced will have no chance of cross pollinating with other species of rice. Or that the pollen produced is sterile19. This has its own problem in that the seeds produced will be unusable in the next year. This will mean that farmers will have to rely on the biotech companies each year to provide new seeds. In fact the rice is a self-pollinating crop and the viability of its pollens is just five minutes. Therefore the distance to which winds can carry it is rather immaterial20. ...read more.

Further to this the Nature study on the effects of Bt causing "high mortality rates in monarch butterfly caterpillars". This is a surprising conclusion as this study showed that the pollen had to be ingested in order for the pollen to kill the caterpillar when they consume the milkweed plant. This experiment was also done in the lab and not in the field. When this experiment was repeated at the University of Guelph "under natural conditions"22, Bt corn has no effect on the monarch butterfly. Although laboratory experiments have their merits they can never be a true substitute for in the field research. Although I do trust the validity of the research done in the first experiment (as Nature is a top ranked journal), I would rather rely on data that comes from field research as this is a better reflection of what is actually happening. To research how GM crops are created I used the information from the following website http://www.scq.ubc.ca/genetically-modified-foods/ . Also this seemed to a professional website, it is easy for anybody to create a website and often the information can be unreliable. To ensure that this information presented was correct I looked up the technique in: Biological science 1 organisms, energy and environment, in the book I found that the technique described in the webpage was accurate and correct. ...read more.