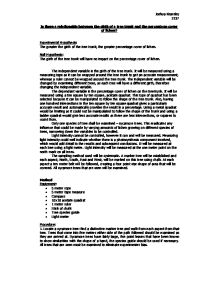 Is there a relationship between the girth of a tree trunk and the percentage cover of lichen?

Using a quadrat with thinner lines defining where the intersection points were could have reduced this source of error. Much of the lichen on the trees was a similar colour to moss and algae. This presented a problem with distinguishing between the species. Some algae or moss could have been counted and equally some lichen could have been classed as moss or algae and therefore left out. A way to get around this problem would be to use a magnifying glass to look at the species more closely and therefore making it simpler distinguishing between the species. Knuckles on the tree trunk were another issue. It was difficult to get an accurate measurement of lichen cover when the quadrat was not placed against the trunk due to a knuckle causing the quadrat to fold awkwardly. There is no real method to counter act this problem. The only thing to do was to attempt to measure as accurately as possible given the conditions. Even with the difficulties of the investigation, the overall influence was still relatively low. The results gained were still accurate and the data and statistical test has shown them to be valid as the larger the girth of the tree trunk, the greater percentage cover of lichen. This was evident when carrying out the investigation. Without the sources of error, the results would be more accurate, however it is likely that the null hypothesis would still have been rejected, therefore the results are still reliable even with the sources of error. ?? ?? ?? ?? Joshua Kearsley 2137 ...read more.

Very well done piece of coursework. The first thing I notice is that there is no introduction to this piece which should set out the scientific context and reasoning behind the investigation and what the candidate is setting out to ...

Very well done piece of coursework. The first thing I notice is that there is no introduction to this piece which should set out the scientific context and reasoning behind the investigation and what the candidate is setting out to do. Main body of the text is very good, as is the evaluation. Should have included a separate conclusion. The response overall to the investigation is to a very high level and the response from the candidate is clear to read.

Consider the different variables and how it will measure than well. Considers the use of different quadrats and discusses why they have chosen the method they have. Attempts to remove any confounding factors that could influence the results by measuring them. Uses an adequate statistical test. The experiment was successful and proved the experimental hypothesis which was then explained scientifically and was supported by the results and the statistical test. Also expands on each answer by determining other affects such as light intensity and aspect that could affect the lichen growth on the tree which demonstrates a deeper analysis and understanding from the candidate. Uses the evaluation to point out errors and suggest improvements which also supports a deep level of analysis. Could have expanded and improved the analysis by using more than one type of statistical test and using graphs to support the data. It would also have been a good idea to devise a conclusion separate to the evaluation.

Punctuation, grammar and spelling all to a very high level.