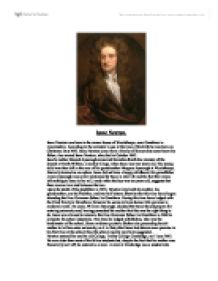 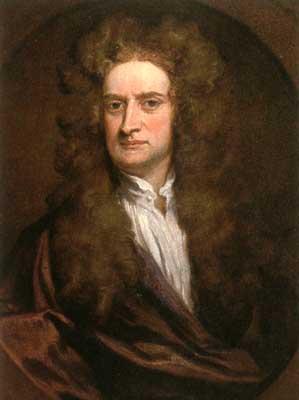 Isaac Newton was born in the manor house of Woolsthorpe, near Grantham in Lincolnshire. According to the calendar in use at the time of his birth he was born on Christmas Day 1642. Isaac Newton came from a family of farmers but never knew his father, also named Isaac Newton, who died in October 1642.

Isaac's mother Hannah Ayscough remarried Barnabas Smith the minister of the church at North Witham, a nearby village, when Isaac was two years old. The young child was then left in the care of his grandmother Margery Ayscough at Woolsthorpe. Basically treated as an orphan, Isaac did not have a happy childhood. His grandfather James Ayscough was never mentioned by Isaac in later life and the fact that James left nothing to Isaac in his will, made when the boy was ten years old, suggests that there was no love lost between the two.

Newton entered his uncle's old College, Trinity College Cambridge, on 5 June 1661. He was older than most of his fellow students but, despite the fact that his mother was financially well off, he entered as a sizar. A sizar at Cambridge was a student who received an allowance toward college expenses in exchange for acting as a servant to other students. Newton's aim at Cambridge was a law degree. Instruction at Cambridge was dominated by the philosophy of Aristotle but in the third year of the course he was allowed to study whoever he wanted to. Newton studied the philosophy of Descartes, Gassendi, Hobbes, and in particular Boyle. The mechanics of the Copernican astronomy of Galileo attracted him and he also studied Kepler's Optics.

Despite some evidence that his progress had not been particularly good, Newton was elected a scholar on 28 April 1664 and received his bachelor's degree in April 1665.

According to the well-known story, it was on seeing an apple fall in his orchard at some time during 1665 or 1666 that Newton conceived that the same force governed the motion of the Moon and the apple. He calculated the force needed to hold the Moon in its orbit, as compared with the force pulling an object to the ground. He also calculated the centripetal force needed to hold a stone in a sling, and the relation between the length of a pendulum and the time of its swing. These early explorations were not soon exploited by Newton, though he studied astronomy and the problems of planetary motion.

As Newtonian science became increasingly accepted on the Continent, and especially after a general peace was restored in 1714, following the War of the Spanish Succession, Newton became the most highly esteemed natural philosopher in Europe. His last decades were passed in revising his major works, polishing his studies of ancient history, and defending himself against critics, as well as carrying out his official duties.

The candidate gives a detailed description of the life of Isaac Newton, including his early childhood, his college years and several of his discoveries. However this essay is missing a suitable introduction. You should always introduce the topic your discussing, ...

The candidate gives a detailed description of the life of Isaac Newton, including his early childhood, his college years and several of his discoveries. However this essay is missing a suitable introduction. You should always introduce the topic your discussing, this is your chance to catch the readers attention and encourage them to read all of your essay rather than simply skim through it.

The information provided is initially very detailed, the candidate has clearly put in a lot of time and effort to source this information and write it up in their own words. However it is essential that your write a bibliography stating any webpages or other sources you have you used when putting together this type of essay. In addition the ending of this piece of work feels a little rushed, considering the amount of detail given relating to Newtons earlier life there seems to be a great deal of information missing relating to his later achievements. Furthermore there is no real conclusion to this piece of work. A good conclusion summaries your key points, allows you to discuss personal opinions and leaves the reader with a good impression.

The information in this piece of work is laid out in a clear and coherent manner and there are no real issues with either spelling or grammar.