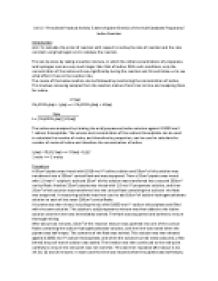 ﻿Unit 2 - Prescribed Practical Activity 5 James Aspden Kinetics of the Acid-Catalysed Propanone/Iodine Reaction Introduction: Aim: To calculate the order of reaction with respect to iodine,the rate of reaction and the rate constant using hydrogen ions to catalyse the reaction. This can be done by taking a reaction mixture, in which the initial concentrations of propanone and hydrogen ions are very much larger than that of iodine. With such conditions, only the concentration of the iodine will vary significantly during the reaction and this will allow us to see what effect it has on the reaction rate. The course of the below reaction can be followed by monitoring the concentration of iodine. This involves removing samples from the reaction mixture from time to time and analysing them for iodine. H+(aq) CH3COCH3(aq) + I2(aq) ==> CH3COCH2I(aq) + HI(aq) _________Rate__________ k = [CH3COCH3(aq)] [H+(aq)] The iodine was analysed by titrating the acid/propanone/iodine solution against 0.0050 mol l-1 sodium thiosulphate. ...read more.

A burette was then rinsed, including the tip with 0.0050 mol l-1 sodium thiosulphate and filled with the same solution. The sulphuric acid/propanone mixture was then added to the iodine solution and the timer was immediately started. The flask was stoppered and swirled to ensure thorough mixing. After about two minutes, 10cm3 of the reaction mixture was pipetted into one of the conical flasks containing the sodium hydrogencarbonate solution, and the time was noted when the pipette was half empty. The contents of the flask was swirled. This solution was then titrated against 0.0050 mol l-1 sodium thiosulphate, and when the solution turned straw coloured, a few (three) drops of starch solution was added. The titration was then continued to the end-point carefully to ensure the end-point was not overshot. This was then repeated after about 6, 10, 14, 18, 22 and 26 minutes. ...read more.

This is because on the graph the gradient was constant with respect to iodine concentration. The rate of the reaction was 2.26x10-6 and the rate constant was calculated to be 1.8x10-5 mol-1 l/s. If a lower temperature was used the reaction rate would decrease because temperature is a measure of the average kinetic energy particles have, so therefore there would be fewer sucessful collisions. If a lower initial concentration of propanone was used, the rate of reaction would decrease, as there would be a fewer number of particles able to collide. Lowering the concentration of iodine would not effect the reaction rate as it is zero order. The rate constant would not be affected by a higher temperature or a higher concentration of iodine. Iodine is not in the rate determining step because it is zero order and therefore not in the rate equation.The rate determining step is determined by the slowest step in a reaction mechanism, shown by the rate equation. ...read more.