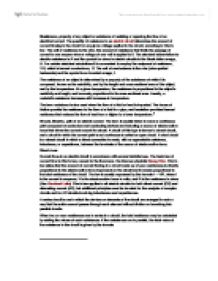 Resistance, property of any object or substance of resisting or opposing the flow of an electrical current. The quantity of resistance in an electric circuit determines the amount of current flowing in the circuit for any given voltage applied to the circuit, according to Ohm's law. The unit of resistance is the ohm, the amount of resistance that limits the passage of current to one ampere when a voltage of one volt is applied to it. The standard abbreviation for electric resistance is R and the symbol for ohms in electric circuits is the Greek letter omega, Ω. For certain electrical calculations it is convenient to employ the reciprocal of resistance, 1/R, which is termed conductance, G. The unit of conductance is the mho (ohm spelled backwards) and the symbol is an inverted omega, .

The resistance of an object is determined by a property of the substance of which it is composed, known as the resistivity, and by the length and cross-sectional area of the object, and by the temperature. At a given temperature, the resistance is proportional to the object's resistivity and length, and inversely proportional to its cross-sectional area.

Current flows in an electric circuit in accordance with several definite laws. The basic law of current flow is Ohm's law, named for its discoverer, the German physicist Georg Ohm. Ohm's law states that the amount of current flowing in a circuit made up of pure resistances is directly proportional to the electromotive force impressed on the circuit and inversely proportional to the total resistance of the circuit. The law is usually expressed by the formula I = V/R, where I is the current in amperes, V is the electromotive force in volts, and R is the resistance in ohms (SeeElectrical Units). Ohm's law applies to all electric circuits for both direct current (DC) and alternating current (AC), but additional principles must be invoked for the analysis of complex circuits and for AC circuits involving inductances and capacitances.

A series circuit is one in which the devices or elements of the circuit are arranged in such a way that the entire current passes through each element without division or branching into parallel circuits.

in which L is inductance, C is capacitance, and f is the frequency of the current. The quantity in the denominator of the fraction is called the impedance of the circuit to alternating current and is sometimes represented by the letter Z; then Ohm's law for AC circuits is expressed by the simple equation I = E/Z.[2]