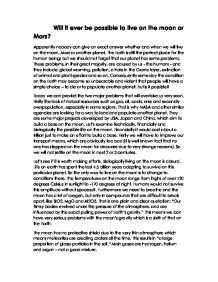 Will it ever be possible to live on the moon or Mars?

Apparently nobody can give an exact answer whether and when we will live on the moon, Mars or another planet. The Earth is still the perfect place for the human beings but we should not forget that our planet has some problems. These problems, in their great majority, are caused by us - the humans - and they include: global warming, pollution, a hole in the Ozone layer, extinction of animal and plant species and so on. Consequently someday the condition on the Earth may become so unbearable and violent that people will have a simple choice – to die or to populate another planet! But is it possible?

Today we can predict the two major problems that will overtake us very soon. Firstly the lack of natural resources such as gas, oil, coals, ores and secondly overpopulation, especially in some regions. That is why NASA and other similar agencies are looking for a way to land and populate another planet. They are some major projects developed by USA, Japan and China, which aim to build a base on the moon. Let’s examine technically, financially and biologically the possible life on the moon. Financially it would cost about a trillion just to make an effort to build a base. Firstly we will have to improve our transport means, which are obviously too bad (it is well known fact that no one has stepped on the moon for decades due to very strange reasons). So we will not settle on the moon in next 2 or 3 centuries.

Let’s see if it is worth making efforts. Biologically living on the moon is absurd. Life on earth has spent the last 4.5 billion years adapting to survive on this particular planet. So the only way to live on the moon is to change to conditions there. The temperatures on the moon range from highs of over 120 degrees Celsius in sunlight to -170 degrees at night. Humans would not survive this amplitude without spacesuit. Furthermore we need to breathe and the moon has a lot of oxygen, but only in compounds that are difficult to break apart, like SIO2, MgO and Al2O3. That is one plain and clear quotation: “Our flimsy bodies evolved under the pressure of the atmosphere, and are influenced by the exact pulling power of Earth’s gravity.” This means we can have very serious problems with the moon’s gravity which is a sixth of that on the Earth.

The moon has no protective shield due to the very thin atmosphere which means meteorites are creating craters all the time. This results in “a large proportion of glassy particles in the soil.” Main gases are hydrogen, helium and argon – not a good mixture.

Surprisingly the moon has some advantages – the presence of energy resources and some vital chemical elements like oxygen. Moreover NASA has given an exact answer – “Can anything from Earth live on the Moon? – YES”. On 17 April 1967 Surveyor 3 was launched. It was a small robotic spacecraft whish took pictures of the moon’s surface and dug trenches with a mechanical arm. On 19 November 1969, Apollo 12, removed some parts of Surveyor 3 and brought them back to the Earth. Here are some aspects of NASA’s report:

“The camera was open under sterile conditions and many samples were taken from inside. A small piece of foam was put into a special broth, rich in nutrients, to allow the growth of any microorganisms that might have survived within the camera. By the fourth day a small amount of growth was observed hanging from the foam and by the next day white growths could be seen all over the foam in the broth. The microorganisms were identified as a strain of Streptococcus mitis …. Because the camera was not rigorously sterilized before launch, the scientists concluded that the Streptococcus mitis was inside the camera originally…”

The bacteria survived on the moon despite the vacuum and the temperature extremes. Most scientists suppose that it went into survival mode and after being on the moon a year and a half the bacteria was able after a short time to begin growing again. This report shows one very important thing the conditions on the moon are harsh but not so brutal. A bacterium from the Earth has survived – a good start.

Obviously the moon is not the best place in the Universe, but fortunately we have better alternative – Mars. Why is Mars better? Simply, the slow rotation of the moon would not allow plant growth. Mars is protected from radiation while the moon is not. Lastly, Mars’ atmosphere makes a landing easier. It seems that Mars is quite suitable, but is it really?

Some of the major components we should examine are: gravity, soil content, water, oxygen, nitrogen and other chemical elements. Martian atmosphere has only 3% nitrogen and 95% carbon dioxide (Earth’s atmosphere contains 80% N). Nitrogen is important for plants, which can produce oxygen through photosynthesis. So it is a simple chain: no N – no plants – no O – no life.  According to the data from Phoenix Lander (June, 2008) the Martian soil is not so unfavourable. It is slightly alkaline and containing vital nutrients such as magnesium, sodium, potassium and chloride, all of which are necessary for the Earth’s plants. Scientists concluded that the most suitable plant for this kind of soil will be asparagus. In August Phoenix Lander showed traces from “salt perchlorate, confirming that the Martian surface is considerably basic, measuring at 8.3”. But don’t panic, this results are not highly accepted.

Some people think that the Martian atmosphere disappeared into space due to its weak gravity. But scientists know that objects with an even weaker gravity can support a thick atmosphere. One example is Saturn’s biggest moon – Titan, which is the only moon with an atmosphere. So it is not something to worry about, because we have bigger problem called water.

Schiaparelli discovered “canals” on Mars and later Percival Lowell drew out detailed maps showing criss-crossing waterways. These theories about the “canals” have been rejecting 3 or 4 times but currently scientist claim that there is small quantity of frozen water on Mars. This is part of NASA’s report: “the seasonal frosting and defrosting of southern ice cap results in the formation of spider-like channels carved on 1 meter thick ice by the sunlight.” Moreover some months ago were taken pictures which showed ice only 5-6 cm under the surface. However, scientists are certain that the quantity of water is not enough.

Summing up all the information above I would say that it is possible to live on Mars even today. But we should get there first and even if we do it will be extremely expensive to produce water and oxygen to survive. There is another way which will take many years – to change the climate. It is possible through human activity to be established better atmosphere and active hydrosphere. These two components will change the face of the whole planet and we will create a copy of the Earth.

In addition living on the moon is probable because it is near and we have already been there, but the conditions on Mars are much more favorable. Anyway humans will not populate another planet in the next few centuries and it is not necessary because our planet is our paradise. What we should do is to preserve it and stop all destructive processes.