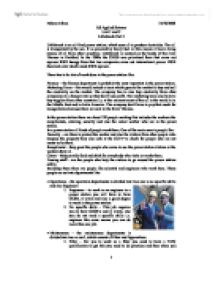 Littlebrook is an oil-fired power station, which uses oil to produce electricity. The oil is transported by the sea. It is powered by heavy fuel oil this means it has to bring tonnes of oil from other countries. Littlebrook is located on the banks of the river Thames in Dartford. In the 1990s the CEGB was privatised from that came out npower RWE Innogy from that two companies came out international power. RWE then took over which made RWE npower. There has to be lots of work done in the power station like: Finance - the finance department is probably the most important in the power station. Marketing Team - this would include a team which goes to the market to buy and sell the electricity on the market. The company has to also buy electricity from other companies at a cheaper rate so they don't lose profit. ...read more.

No specific skills - This job requires you to have GCSE's and A levels, also you do not need a specific skills i.e. engineer this came means you can do more than one job. * Maintenance - the maintenance departments is divided into two as well, which consist of Fitter and Apprentices. 1. Fitter - For you to work as a fitter you need to have a NVQ qualification to get this you need to do practices and then when you pass your exam you can get this qualification and work at the power station. Apprentices - For you to be an apprentice at the power station you need to have good GCSE results and met the requirement they ask for. * Engineering - is also divided into two different paths this consist of a degree and a good degree. 1. Degree - in engineering you can get a degree in Mechanical, Electrical, Computing & Control this might be getting a bachelor of engineering degree or other degrees. ...read more.

Then after the steam has finished it moves in to the condenser which turns the steam into water where there are pipes with cold water from the river Thames to condense the steam. After all of this electric current is made at a voltage of 23,500. To make this more efficient the voltage has been increased when it is sent into the National Grid system. ICT in the power station is used a lot, when I first visited Littlebrook Power Station I thought there would be more than a thousand workers then when I heard they were only 120 I was shocked. So ICT in the power plant is very important. First of all ICT is used for communication from the main room to the lower rooms. The machines in the big hall have to also be computerised because the things you have to do are lots that humans can do. ?? ?? ?? ?? Nahom Efrem 16/10/2008 AS Applied Science Unit 1 and 2 Littlebrook Part 2 1 ...read more.