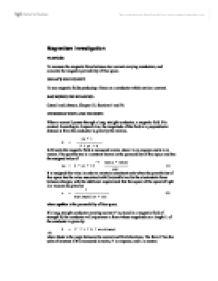 Magnetism Investigation PURPOSE To measure the magnetic force between two current-carrying conductors, and calculate the magnetic permability of free space. WHAT'S THE POINT? To see magnetic fields producing a force on a conductor which carries a current. BACKGROUND READING: Cutnell and Johnson, Chapter 21, Sections 5 and 10. INTRODUCTION AND THEORY: When a current I passes through a long, straight conductor, a magnetic field B is created. According to Ampere's law, the magnitude of the field at a perpendicular distance d from the conductor is given by the relation. mu * I B = -------------- 2 * pi * d In SI units the magnetic field is measured in tesla when I is in amperes and d is in meters. The quantity mu is a constant known as the permeability of free space and has the assigned value of -7 tesla * meter mu = 4 * pi * 10 ------------- (1) amp It is assigned this value in order to maintain consistent units when the permittivity of free space has the value associated with Coulomb's law for the electrostatic force between charges, with the additional requirement that the square of the speed of light in a vacuum be given by 1 c = ------------------- (2) sqrt(epsilon * mu) where epsilon is the permeability of free space. ...read more.

Use care when handling this device even after the experiment is completed. PROCEDURE: 1. The equilibrium separation of the two conductors do should initially be set at a few millimeters. If it is not, very carefully move the counterpoise weight behind the mirror by turning it on its screw. Move the counterpoise weight until the upper bar comes to rest a few millimeters above the fixed bar. 2. You will need to measure the separation between the upper and lower bars. Use the following method, in which the motion of the laser spot shows the motion of the upper bar in a greatly magnified manner. Plug in the laser's power cord so that a red spot appears on the mirror, and its reflection back near the laser itself. Let the upper bar settle in its rest position, a small distance above the fixed lower bar. Note the position of the laser spot on the scale attached to the plastic bar at the far end of the table; we will refer to this as the equilibrium position. Next, place the 500-mg weight gently onto the pan at the center of the upper bar. The bar should sink down on top of the lower bar and stay there. As the upper bar sinks, the mirror tilts and the reflected laser spot sinks, too. ...read more.

In what step of your procedure do you think the largest error occured? Appendix: Magnification Using the Optical Lever We start off with the upper bar and lower bar some distance do apart. When the laser beam reflects from the mirror, it strikes the scale at some point P. Then we weigh down the upper bar so that it tilts by an angle theta and comes into contact with the lower bar. The distance from the knife edges to the end of the upper bar is a, so do tan (theta) = ---- a The mirror attached to the upper bar shares this tilt. The laser beam strikes the mirror at an angle theta and is reflected at an angle theta, so the light is deflected by a total angle 2 * theta and now strikes the scale at point Q. The distance from the mirror to the scale on which the laser shines is b, so we can figure out the distance D between P (the equilibrium location of the laser spot) and Q (the location of the spot when the bars touch). x = b * tan(theta) do = b * ---- a D = distance from P to Q = 2 * x b = 2 * --- * do a If we rearrange to solve for the distance do between the conductors in the equilibrium position, we find D * a do = ------- 2 * b Last modified by MWR 5/2/1999 ...read more.