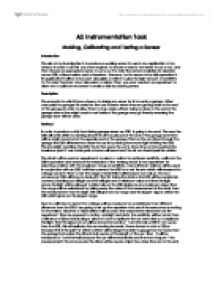 The aim of my investigation is to produce a working sensor for use in any application of my choice. In order to do this you were required to choose a task for my sensor to carry out, and then choose an appropriate sensor to carry out the task. The sensors available for selection are an LDR, a linear resistor and a thermistor. However, for the sensor to be fully operation in its application it will be to be used alongside a resistor to give the right amount of sensitivity for the task, therefore I must also select a resistor. Then you must conduct an experiment to allow me to calibrate my sensor to make a fully functioning sensor.

In order to produce a fully functioning garage sensor an LDR is going to be used. The way the LDR will work within my sensing circuit is it will be placed at the end of the garage and there will be a light mounted at the opposite end of the garage.

The final area of my sensing circuit to be tested using my current equipment setup is the resolution.  Ideally for a parking sensor the time response should change frequently because the car will be moving at a steady pace and the sensor should be able to keep up with the speed the car is doing. If it fails to do this the foreseeable problem is that the beeps will be delayed and therefore the instructions to the driver will be delayed. To test the time response, the equipment will be set up in the same way as the previous experiment with the addition of a stopwatch. I will then time the time it takes for the LDR to sense a change in the position of the piece of car replicating the car.

The method chosen to measure the distance a car is away from the end of a garage is by having an LDR at the end wall and then a light at the opposing side and the LDR measuring the car is away. However this was not the only way to conduct the experiment, the LDR could have been placed on the floor at the furthest point a car can safely stop and a buzzer or light would come on when the car was on this point. Although, the reason this method was discounted is because it does not take readings as frequently as my method due to their only one point at which it measures where the car is.

During the experiment there were two main systematic errors present.  The first was in the time response experiment. The systematic error was created when I was operating the stopwatch the results which I collected were collected with my reaction time to press the stop watch included therefore there was a percentage of error included.

The second systematic error produced was due to the calibration and accuracy of the measuring equipment. Firstly, the positioning of the ruler on to desktop was not always placed in the exact same place every time leading to a systematic error. Then the voltmeter may also not have been correctly calibrated which could have led to further errors in the results.

The aim was to producing a working sensing system and this has been successfully achieved as the final calibrated sensing system serves it purpose well. Comparatively with other similar sensing systems it works just as well if not better. The main reason for this is because of its simplicity, the use of an LDR is more than adequate to sense a car approaching the end of a garage.