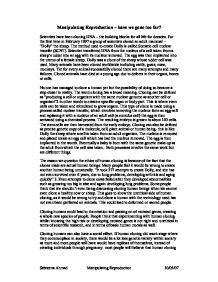 Manipulating Reproduction - have we gone too far?

Manipulating Reproduction - have we gone too far? Scientists have been cloning DNA - the building blocks for all life for decades. For the first time in February 1997 a group of scientists cloned an adult mammal - "Dolly" the sheep. The method used to create Dolly is called Somatic cell nuclear transfer (SCNT). Scientist transferred DNA from the nucleus of a cell taken from a sheep's udder into an egg with its nucleus removed. The egg was then implanted into the uterus of a female sheep. Dolly was a clone of the sheep whose udder cell was used. Many animals have been cloned worldwide including cattle, goats, mice, monkeys. Yet for every animal successfully cloned there are many attempts and many failures. Cloned animals have died at a young age due to defects in their organs, bones or cells. No one has managed to clone a human yet but the possibility of doing so became a step closer to reality. ...read more.

Even attempts to clone cows failed after they developed abnormalities such as growing too big in size and again developing lung problems. Some people think that we shouldn't even being discussing cloning human beings when we cannot even clone a healthy cow or sheep. This goes to show the unethical side of human cloning, as it would be wrong to try and clone a human with the technology need has not even been perfected on animals. This could lead to deformed or sacred people. Cloning humans could lead to the creation and passing on of mutated genes, creating a whole new species of people. People think that experimenting with human cloning whilst knowing the high risk or developing mutated genes is not right and unethical in terms of scientific research, and in terms of basic human morals as well. Cloning humans can also have a social effect. If human cloning did reach stage where they commonplace in society, there would be a lot less genetic variety within society as more and more people will have would have replicas of themselves, instead of creating individuals through pregnancy. ...read more.