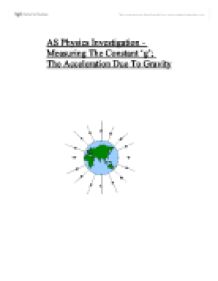 Measuring The Constant g; The Acceleration Due To Gravity

AS Physics Investigation - Measuring The Constant 'g'; The Acceleration Due To Gravity Contents Abstract - Page 1 Introduction - Page 2 Equipment Listing - Pages 2-3 Preliminary Investigation - Pages 3-4 Final Methods - Pages 4-5 Results Tables & Statistical Analysis - Pages 5-7 Conclusions To Data - Page 7 Evaluation Of Experiment - Page 8 Abstract The gravitational field strength , also referred to as the 'acceleration due to gravity' (symbol 'g') is a crucial fundamental constant which affects the motion of all objects from within earth's gravitational field. For this investigation, I chose to measure this using suitable methods obtained from research into the calculation of 'g', and ultimately I had successfully done so to a substantial degree of accuracy, making it a success overall. The two main techniques which I used to measure this are as follows: 1) Dropping a preferably large and dense object from various heights, and timing how long it takes to fall to the ground. The displacement 's' and time 't' are related to 'g' by this formula: s = 1/2gt( Which rearranges to: g = 2s/t( 2) This method involved timing the swings of a pendulum , with a solid mass suspended by a string of a given length. The period of a pendulum (the time for one back and forth oscillation) is given by: P = 2?v(L/g) Where 'L' is the length of the string. In order for me to keep the systematic error as low as possible, I made the string as long and as light as possible, and made the suspended mass fairly dense, to reduce the effects of air resistance on my results. ...read more.

I have learnt that the angle from which I swing the pendulum from creates a huge impact on the linearity of the swing, as increasing the vertical amplitude effectively increases the horizontal amplitude of the oscillations, making the pendulum swing unnecessarily side to side, as opposed to just back and forth. As a result to this, the pivot of the string becomes more subjected to friction than normal, and so my results will not reflect the true acceleration of a freely moving body subjected to only gravity's influence, hence reducing the reliability. I will therefore in my final experiment, aim not to swing the pendulum from angle any higher than roughly 30( from the normal. I will also time the average period for 4 oscillations instead of 20, as having done the experiment I realised that by the time 20 have occurred, the horizontal oscillations have become so great that they become significantly affected by friction, and so a much smaller number of swings deemed to be appropriate. Final Methods Experiment 1 1) Find a flat vertical wall and measure 0.2 metre increments ranging from 1.6 metres, to 2.4 metres, using a measuring stick and a pen to mark them. 2) Starting from the lowest increment, drop the Plasticine ball and immediately start and stop the stop watch as it leaves your hand, and when it hit's the ground. As the heights increase use a chair to stand on to make dropping easier. ...read more.

I can firstly, some how use a light gate to measure time in my experiments, as this has a much quicker response time than a human, and so will be much more precise. To measure quantities such as length, I could next time use a screw gauge micrometer, giving me much further and more exact increments to measure it from. Finally another possible alternative method of experimentation to obtain g could be done using a ticker timer, which I attempted to use. The idea behind this methodology is that the ticker timer punches indentation in to a moving pressure sensitive strip of paper every tenth of a second. If one suspends a mass at the end of this strip, and allows it to fall freely under the influence of gravity, the ticker timer will respond by making corresponding displacements between each interval of dents, and if once can calculate the change in speed between every point, one can then calculate the acceleration. This acceleration will of course be 'g', however in my trial for this experiment I encountered huge errors in my results, which I chose to not include in this paper, due to their immense lack of reliability. The snag of the metal 'punch' in the paper, effectively must have slowed it down significantly, and so to not allow the attached mass to accelerate freely and completely under the influence of gravity to it's full potential. My pendulum experiment however, by far proved to be the most effective of all three methods, and so my final g value was adequate. ?? ?? ?? ?? ...read more.