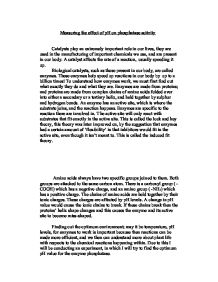 Measuring the effect of pH on phosphatase activity.

Measuring the effect of pH on phosphatase activity Catalysts play an extremely important role in our lives, they are used in the manufacturing of important chemicals we use, and are present in our body. A catalyst affects the rate of a reaction, usually speeding it up. Biological catalysts, such as those present in our body, are called enzymes. These enzymes help speed up reactions in our body by up to a billion times! To understand how enzymes work, we must first find out what exactly they do and what they are. Enzymes are made from proteins; and proteins are made from complex chains of amino acids folded over into either a secondary or a tertiary helix, and held together by sulphur and hydrogen bonds. An enzyme has an active site, which is where the substrate joins, and the reaction happens. Enzymes are specific to the reaction there are involved in. The active site will only react with substrates that fit exactly in the active site. This is called the lock and key theory, this theory was later improved on, by the suggestion that enzymes had a certain amount of 'flexibility' in that inhibitors would fit in the active site, even though it isn't meant to. This is called the induced fit theory. ...read more.

stop reaction by adding 2.5 ml of 10% sodium carbonate, 9. measure colouration using calibrated cards, and colorimeter Equipment Test tubes Pestle and mortar Substrate PPP Mung beans Buffer- of different concentrations, ranging from 2.2-9.2 Sodium carbonate Pipettes By adding sodium carbonate, this it will cause the reaction to stop, and any phenolphthalein to turn pink. It is the colouration of the pink that I will be observing and distinguishing the results. I have chosen to use 8 different buffers of different ph levels; 2.2, 3, 4.2, 5, 6, 7, 8 and 9.2. I tested the pH level of each of the buffers and these are the results I got, that is why same have a reading of .2, however this will make no difference to the experiment. The level of pH is my only variable. As with all experiments, you should only change one thing at a time, keeping all other aspects that may affect the results the same. Because the enzyme mixture will be used for all the experiments, the concentration will be the same. If the concentration were to be different, the experiment with greater enzyme concentration would have a result that would show a greater colour change. Due to there being more enzymes, a greater rate of reaction can be reached. ...read more.

You can tell from my results that the enzyme is very inefficient in alkali environments; there is a great decline in production of phenolphthalein when you start getting below pH 7. Whereas the production of phenolphthalein in an acidic environment as a much less rapid decline. The ionic boning between the amino acids in the proteins which make up the enzyme must break quicker in an alkali environment. The breaking of the bonds allows the enzymes' active site to become misshaped; this means that the rate of reaction is reduced because it is taking longer for the enzyme to join with the substrate to form a substrate-complex and break them up into the products; phosphate and phenolphthalein. There are very few anomalies, the main one which is most faulty is the pH 6 experiment, were there is a difference of 12, however this is quite small, and doesn't really affect the overall result of the experiment. As I said before, this might be due to many reasons; a misread on the colorimeter, experiment having longer time, exposed to different temperature/amount of light. To expand on the investigation I would re-do the experiment, but my range of buffers would be less. I would probably use buffers ranging from pH 5 to pH 7 to get a more exact reading on what the most effective pH level is. ...read more.