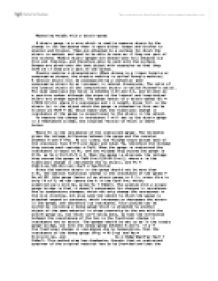 Measuring weight with a strain gauge.

Measuring weight with a strain gauge

shorter and thicker. They are attached to a surface for which the

strain is wanted, and need to be able to move as if they are part of

the surface. Modern strain gauges are etched onto foil because its

thin and flexible, and therefore able to move with the surface.

move as if they are a part of the object.

Elastic modulus = stress/strain (When stress is a linear tensile or

A tensile strain will be accompanied by a reduction (and

compressive strain by an increase) in lateral dimensions. The ratio of

the lateral strain to the longitudinal strain is called Poisson’s ratio1.

For most materials the value is between 0.25 and 0.4, and written as

a positive number although the signs of the lateral and longitudinal

strain are always opposite. The gauge factor of a strain gauge (G) =

VsGe/4. This method also has drawbacks, though: that an unstrained

dummy gauge is not necessarily at the same temperature as the

active one. These problems can be solved by mounting the dummy

the direction of strain, so that the gauges are unlikely to have a

measurable difference in temperature. The dummy gauge will be

strained at right angles to its active axis, which will make it slightly

shorter along its active axis, as explained above, which means that

the resistance will decrease by an amount proportional to Poisson’s

member under tensile stress, but I’m planning to use a cantilever, the

end of which I will be putting weights on. In this situation I will be

results. Even so, the gauges would not stick at all the proper way

round, with the plastic backing stuck directly to the cantilever, so I

had to glue them on with the foil on the metal, and hope that the

superglue would insulate the gauge from the cantilever, which it

seems as though it did.

The choice of what to use as a cantilever is a very important one,

reading, but if it is too flexible it will bend too much and the gauges

limit will be exceeded. I think that the metal I used as the cantilever

was too thick, and gave too small a reading, but I was restricted in

my choice by the materials available to me

I think that my technique was a suitable one, as it gave accurate

results without causing major problems or being too complicated:

the most complicated part of the project was assembling the bridge

itself. It is also an adaptable one, with different cantilevers being

used for different weight ranges, and different arrangments of the