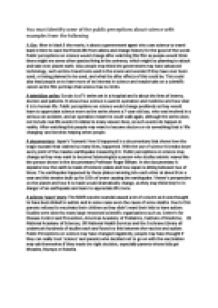 Media reports and the public perceptions about science - MMR scares.

﻿You must identify some of the public perceptions about science with examples from the following A film: Men in black 3 the movie, is about a government agent who uses science to travel back in time to save his friends life from aliens and change history for the good of the world. Public perceptions on science would change after watching this film as people would think there might me some other species living in the universe, which might be planning to attack and take over planet earth. Also people may think the government may have advanced technology, such as time travel tools used in the movie and wonder if they have ever been used, or being planned to be used, and what the after effects of this could be. This could also lead people on to have more of an interest in science and maybe take on a scientific career as the film portrays that science has no limits. A television series: Scrubs is a TV series set in a hospital and is about the lives of interns, doctors and patients. It shows how science is used in operation and medicine and how vital it is to human life. Public perceptions on science would change positively as they would learn to appreciate science more as the series shows a 7 year old boy, who was involved in a serious car accident, and an operation meant he could walk again, although the series does not include real life events it relates to many viewers lives, as such events do happen in reality. ...read more.

Millions of people still smoke carelessly. Pesticide use and its disadvantages: Pesticides are the only toxic substance used intentionally into our environment to kill living things. Key examples of this are: herbicides used for weeds, insecticides used for insects, fungicides used for fungus, rodenticides used for rodents. There are various types of pesticides with various uses. Pesticides are commonly used in day to day life. They have been found to link to serious health hazards such as cancer. The public use pesticides on a daily basis, they can be found places such as: schools, parks, offices, forests, roads, homes and farms. Finding out it is linked to cancer and other serious health hazards may lead people to use it less and only when needed. Research shows a significant link between endocrine disruption which can cause infertility and multiple birth defects such as: hormonal imbalance, incomplete sexual development, impaired brain development, behavioural disorders and many other serious health risks. Also studies show that children who are brought up in homes where pesticides are used are, twice as likely to get brain cancer as a pesticide free home. People may change their lifestyle completely after hearing this as having kids and a family is what some people aspire to, and they would do anything to ensure the health of their future kids. Also they may remove pesticides from their house completely if they have already got a kid. ...read more.

Is the public?s perception of science influenced in a positive way by the media reports science stories (D2)? When it comes to reporting on science, the media creates a parody of science with their choice of stories. The media is very powerful and has a huge influence on people?s views but recent studies show that only 18% of people actually believe what they read in the papers or on the news . Even the paper ?theguradian? published an article on how ?dumbly? the media portrays science. The article explains how science stories usually fall into 3 categories: wacky stories, scare stories and breakthrough stories. A key example of a ?scare story? is the MMR scandal since that was brought out not many have come into the highlight. Newsnight host Jeremy Paxman apologised to MMR experts accepting that the media played a shameful role in the MMR scandal. He accepted that the media blew the whole thing out of proportion and not even Andrew Wakefield was singly responsible. The article explains how the MMR scandal improved this ?bad science? in the media and now scientists are willing to share their expertise to avoid the same situation happening again. Now when publishing anything to do with science ?peer review? is done, this is where the work Is evaluated before it is published to ensure the public is receiving quality information. An example of a breakthrough story is the finding of new information about DNA and how it can wrap itself into a different shape. After a whopping 60 years of research. ...read more.