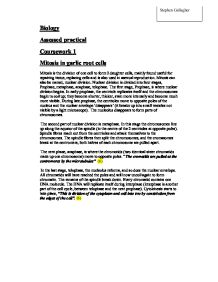 Biology Assessed practical Coursework 1 Mitosis in garlic root cells Mitosis is the division of one cell to form 2 daughter cells, mainly found useful for repairing tissue, replacing cells and is also used in asexual reproduction. Mitosis can also be named, nuclear division. Nuclear division is divided into four stages, Prophase, metaphase, anaphase, telophase. The first stage, Prophase, is where nuclear division begins. In early prophase, the centriole replicates itself and the chromosomes begin to coil up; they become shorter, thicker, stain more intensely and become much more visible. During late prophase, the centrioles move to opposite poles of the nucleus and the nuclear envelope 'disappears' (it breaks up into small vesicles not visible by a light microscope). The nucleolus disappears to form parts of chromosomes. The second part of nuclear division is metaphase. In this stage the chromosomes line up along the equator of the spindle (in the centre of the 2 centrioles at opposite poles). Spindle fibres reach out from the centrioles and attack themselves to the chromosomes. The spindle fibres then split the chromosomes, and the cromasomes break at the centromere, both halves of each chromosome are pulled apart. The next phase, anaphase, is where the chromotids (two identical sister chromatids make up one chromosome) ...read more.

= 5.36 X�= 5.36 There are 4 classes: prophase, metaphase, anaphase and telophase 4 - 1 = 3 degrees of freedom For biology, scientists use the 0.05; this is because they are 95% certain that the results are correct every time and that and 5% certain that the results are due to chance alone * If X� is greater in value than 7.82 then this means it is rejected by the null hypothesis. * If X� is lower in value than 7.82 then this means it is accepted by the null hypothesis. My result for x� is lower than 7.82, therefore my null hypothesis is accepted. My null hypothesis is correct. I do not have to change my null hypothesis Evaluation As there was a lot of equipment used, and a lot of people were doing the experiment in the same room at the same time, there was a possibility that something could go wrong along the way. In my practical, nothing really went wrong for me apart from one thing. I made 2 slides, my first slide, wasn't too good, there were air bubbles and small clumps of the root that hadn't been mashed up enough. ...read more.

and spindle fibres begin to form from the centrioles "� The centrioles are at opposite poles of the cell. � The pairs of homologous chromosomes (the bivalents), now as tightly coiled and condensed as they will be in meiosis, become arranged on a plane equidistant from the poles called the metaphase plate. � Spindle fibres from one pole of the cell attach to one chromosome of each pair (seen as sister chromatids), and spindle fibres from the opposite pole attach to the homologous chromosome (again, seen as sister chromatids)."(�) Anaphase Where the chromosomes are split at the centromeres and each chromatid is pulled apart, to the centrioles, by the spindle fibres "Metaphase sets the stage for chromosome separation in the next stage of mitosis: anaphase. Almost immediately after the metaphase chromosomes are aligned at the metaphase plate, the two halves of each chromosome are pulled apart by the spindle apparatus and migrate to the opposite spindle poles. The kinetochore microtubules shorten as the chromosomes are pulled toward the poles, while the polar microtubules elongate to assist in the separation. The photomicrograph above illustrates the early stage of anaphase where the chromosomes are just becoming completely separated. The microtubules are clearly visible in this complex" (4) Telophase This is where the nucleolus reforms and nuclear envelope also reforms around the chromatids. Spindle fibres brake away and disappear. ...read more.