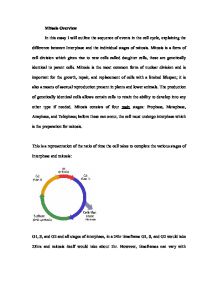 Mitosis Overview In this essay I will outline the sequence of events in the cell cycle, explaining the difference between Interphase and the individual stages of mitosis. Mitosis is a form of cell division which gives rise to new cells called daughter cells, these are genetically identical to parent cells. Mitosis is the most common form of nuclear division and is important for the growth, repair, and replacement of cells with a limited lifespan; it is also a means of asexual reproduction present in plants and lower animals. The production of genetically identical cells allows certain cells to retain the ability to develop into any other type if needed. Mitosis consists of four main stages: Prophase, Metaphase, Anaphase, and Telophase; before these can occur, the cell must undergo interphase which is the preparation for mitosis. This is a representation of the ratio of time the cell takes to complete the various stages of Interphase and mitosis: G1, S, and G2 and all stages of interphase, in a 24hr timeframe G1, S, and G2 would take 23hrs and mitosis itself would take about 1hr. ...read more.

In animal cells, two pair of centrioles formed from the replication of one pair are located outside of the nucleus. Prophase All the DNA that was synthesised how condenses into chromosomes, these are identical chromatids connected at the centre by a centromere, forming a X-shaped object. The chromosomes are greatly thickened and shortened but are still contained within the nuclear envelope. The distinguishing feature of prophase is the set-up of the mitotic spindle, which is used to manoeuvre the chromosomes about the cell. Excess parts from the dismantled cytoskeleton form the spindle. The spindle is initially set-up outside the nucleus. The cell's centrioles are duplicated to form two pairs of centrioles. Each pair becomes the part of the Microtubule Organising Centres (MTOC's) which forms the focus for an array of microtubules, called the aster. The two asters lie side-by-side close the nuclear envelope. Near the end of prophase the asters pull apart and the spindle is formed. The nuclear membrane shows signs of fragmentation and the nucleoli disappear. In late prophase: - The nuclear envelope breaks up. - Polar fibres, which are microtubules that make up the spindle fibres, reach from each cell pole to the cell's equator. ...read more.

This stage is usually characterised by the trailing arms of the chromatids being pulled away from the metaphase plate. Telophase and Cytokinesis In this phase, the chromosomes unwind and become chromatin once again. The spindle disappears, and a nuclear membrane forms around the bundle of chromatin. The cytoplasm divides in the middle of the cell by means of two contractile proteins, which form a cleavage furrow; in plant cells a cell plate is laid down and covered with cellulose to form a separating cell wall. To conclude; mitosis, a means of asexual reproduction of cells consists of four parts: Prophase, Metaphase, Anaphase, and Telophase; the interphase, which is not part of mitosis, is the time it takes to grow and synthesis the DNA necessary for mitosis. The prophase is characterised by the condensation/coiling of the chromatin in the nucleus; the metaphase is characterised by the break down of the nuclear wall and the alignment of the chromosomes on the equator of the cell; the anaphase is characterised by the trailing arms of the chromatids attached to each spindle; and the telophase is characterised pinching of the cell membrane and cytoplasm into two separate cells. www.biology.arizona.edu/cell_bio/tutorials/cell_cycle/main.html http://biology.about.com/library/weekly/aa071300a.htm http://library.thinkquest.org/C004535/text/prophase.html http://www.accessexcellence.org/AB/GG/mitosis.html http://web.ask.com/redir?bpg=http%3a%2f%2fweb.ask.com%2fweb%3fq%3dmitosis%2bprophase%26o%3d0%26page%3d1&q=mitosis+prophase&u=http%3a%2f%2ftm.wc.ask.com%2fr%3ft%3dan%26s%3da%26uid%3d036FFDBE63896EAF3%26sid%3d136D3FBA02887EAF3%26qid%3d601F4B328DB1154EA6721473AC800C04%26io%3d3%26sv%3dza5cb0dea%26o%3d0%26ask%3dmitosis%2bprophase%26uip%3d51805ca7%26en%3dte%26eo%3d-100%26pt%3dMitosis%2b-%2bProphase%26ac%3d24%26qs%3d1%26pg%3d1%26ep%3d1%26te_par%3d203%26te_id%3d%26u%3dhttp%3a%2f%2fwww.genetics.about.com%2flibrary%2fweekly%2faa072700a.htm&s=a&bu=http%3a%2f%2fwww.genetics.about.com%2flibrary%2fweekly%2faa072700a.htm&o=0 http://www.biology.arizona.edu/cell_bio/tutorials/cell_cycle/cells3.html AS level notes Enclyclopedia Brittanica Biology Text book Mitosis and growth ...read more.