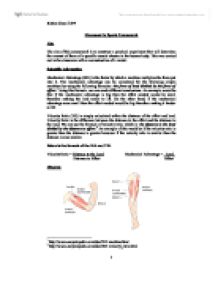 The aim of this coursework is to construct a practical experiment that will determine the amount of force of a specific muscle chosen in the human body. This was carried out in the classroom with a reconstruction of a model.

This risk assessment is not based on the actual experiment, as it does not contain any severe risks however; the apparatus being used has potential dangers if not used properly. These would be:

I predict that the mechanical advantage will increase, as the position of the ruler will move away from the pivot and the velocity ratio will decrease.

Looking at my results and graphs, I felt that the experiment went exceptionally well however there was basis for improvements. During the experiment, errors that had occurred were the limited use of equipment. To elaborate, there was not enough equipment for the whole class therefore some pupils had to wait their turns and equipment kept exchanging hands on a regular basis. The effect this had on the experiment was it would have caused the distance to change. Another error that had occurred was the rulers. They had nails inserted into them at each cm but were not placed accurately therefore had to keep changing rulers which prolonged the experiment. Finally, the weights were not as accurate as they could have been which would have had a knock on effect on the results.

To test the work further, I would conduct an experiment with different shapes to determine whether they have an effect on the results.