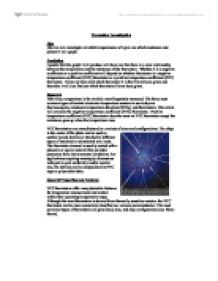 therefore I will also find out which thermistor I have been given.

NTC thermistors are manufactured in a variety of sizes and configurations. The chips in the center of the photo can be used as surface mount devices or attached to different types of insulated or uninsulated wire leads. The thermistor element is usually coated with a phenolic or epoxy material that provides protection from environmental conditions. For applications requiring sensing tip dimensions with part-to-part uniformity and/or smaller size, the devices can be encapsulated in PVC cups or polyamide tubes. 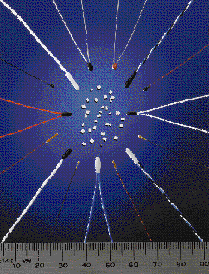 NTC thermistors offer many desirable features for temperature measurement and control within their operating temperature range.

From my results it has enabled my to draw my graph and to analyse my results further.

From looking at my graph I have discovered that my conclusion was wrong.  The graph was not linear and there is not even a close relationship between resistance and temperature.  I have however discovered that the thermistor I used was a NTC.

Looking at my results there are some anomalies these are highlighted below:

The anomalies would of caused the results to come out wrong.  These results could of happened due to a number of reasons.  One is if the thermistor was not in thermal equilibrium, this means that the thermistor may not of been at the same temperature as the water it was placed in.  Another is the thermometer might not of been exactly where the thermistor was so there could be a different in temperature.  Another is if all the ice had not melted this would mean that there would be different temperatures in the beaker.  This means that my curve cannot be trusted.  Also in the lower temperatures there were big differences between the resistances, so more results would give a more accurate graph.

I have done further research with an equation and a graph that I can now compare my graph with:

The resistance vs. temperature characteristic (also known as R/T curve) of the NTC thermistor forms the "scale" that allows its use as a temperature sensor.

Washer-shaped thermistors are essentially a variation of the disc type except for having a hole in the middle, and are usually leadless for use as surface mount devices or as part of an assembly. Rod-shaped thermistors are made by extruding a viscous oxide-binder mixture through a die, heat-treating it to form a ceramic material, applying electrodes, and attaching leads. Rod thermistors are used primarily for applications requiring very high resistance and/or high power dissipation.

The graph (fig 1) is very similar to mine it too begins to curve after around 40Co and before that it is straight.  So from this graph my graph is correct but not accurate.