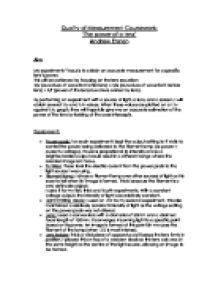 My experiments focus is to obtain an accurate measurement for a specific lenss power.

‘The power of a lens’

My experiments’ focus is to obtain an accurate measurement for a specific lens’s power.

This will be achieved by focusing on the lens equation:

By performing an experiment with a source of light, a lens, and a screen, I will obtain several 1/u and 1/v values. When these values are plotted on a 1/v against 1/u graph, they will hopefully give me an accurate estimation of the power of the lens by looking at the axes intercepts.

I used it for my first, third and fourth experiments. With a constant voltage output; the intensity of light was relatively constant.

It has a resolution of 1mm and therefore creates an uncertainty of +/- 0.5mm in my ‘U’ measurements. This turned out to be a very small percentage uncertainty in the U values ((0.5mm/200mm) x 100) gave the highest value of 0.25%. Such a small percentage is negligible and hence I have ignored uncertainties in U in my calculations. 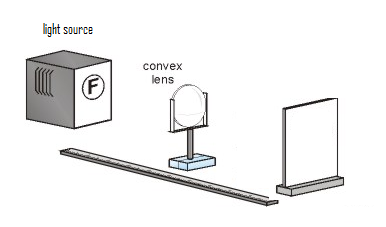 These represent the curvature of waves before and after.

Referring to the curvature equation, the V and U values are

essentially the radii of curvature (values stated in metres). 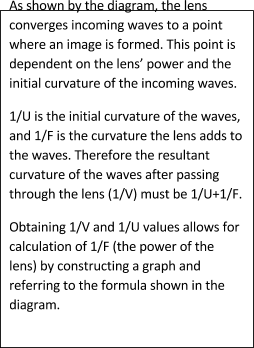 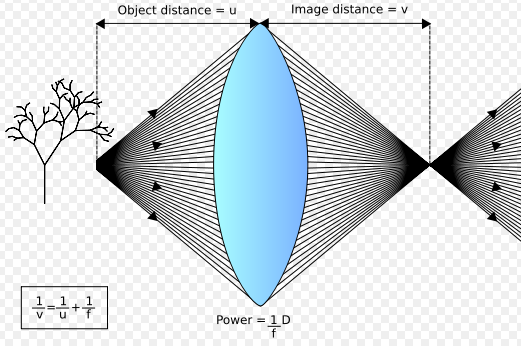 While this is certainly not an experiment that requires a high level of caution, it can be slightly harmful if no care is taken.

The light sources used are quite bright. These should not be looked at directly for an extended period of time as it could cause damage to the eyes.

Furthermore a bright filament lamp can become rather warm, it is best to avoid touching it while in use.

This is the U and so 1/U value. It is varied by placing the lens at different distances away from the light source.

Dependant variable: This is the V and so 1/V value. Its value changes when the U value is varied and hence is dependant of it.

Voltage output: If I were to alter the voltage setting, the light source’s intensity will vary which could result in a change of where the image is formed.

Also I must use the same diameter and focal length lens; lenses with different focal lengths will of course have different powers.

Accuracy: All but one of the plotted points come into contact with the line of best fit. This indicates that my results are quite accurate. The U=325 result is not intercepted and so can be classed as an outlier.

Reliability: The reliability of the first graph cannot be summarised well as the uncertainties are impossible to accurately plot for its scale. However the measurement has an uncertainty of 0.125 Dioptres, this will make the result slightly less reliable.

The plotted values have produced minimum, mean, and maximum gradients that are slightly more spread in comparison to the first experiment. They intercept the x axis at -6.26 D,           -6.38D and -6.46 D respectively.

This result is (6.435-6.37) = 0.065 Dioptres less than the value achieved in the first graph. Two graphs producing similar results suggest it is quite accurate, but certainly not as much as the first experiment where the difference was merely 0.01 Dioptres.

The uncertainties in general are certainly smaller than the first experiment overall and so this suggests that my values cannot be influenced by them significantly, meaning my results should be reliable.

Looking at the mean gradient line, every single plot is intercepted suggesting the results are accurate. However, quite a few results only just touch the line with the maximum/minimum limits, indicating a minor lack of accuracy.

I would summarise that my results are quite accurate and reliable on the basis of the second graph. However when comparing the results to the first experiment, all uncertainties are larger, and the result has a larger error against the claimed power.

While I opted to work in a darker environment to try and obtain a more accurate uncertainty in V, a different imaging problem arose. The LED does not produce a distinctive image like the filament lamp; instead I had to judge it to be in focus when the light was most intense. This proved to be rather difficult and hence created some uncertainty, which largely contributed to the higher uncertainties in the results.

To combat this error I decided it was best to revert back to using the filament lamp.

Improvements for the next experiment:

Utilising the suggested improvements from my first experiment, I obtained results which had lower uncertainties. However the imaging problem opposed this improvement and lead to a higher uncertainty in the final measurement.  Also the fact its largest uncertainty (0.0914) is larger than the filament lamp’s largest (0.0873) insinuates that it is generally less reliable for measurements.

Based on this I will revert back to using the filament lamp as my light source in hope of achieving more reliable results. In combination with the 25mm gap between each U distance method, I believe I will achieve more accurate results.

Another problem was that during the higher values of U, the range of which the image was formed was rather small and so it was hard to tell when exactly the image was in focus. I identified this problem after my first experiment and avoided it to a certain extent by focusing on lower U values.

To avoid this potential problem I ensured that I completed each experiment’s results in one sitting.

By having a cautious approach to my experiments I managed to obtain accurate and reliable results. I identified variables and kept them under control so my results could not be affected by them. After each experiment I identified ways to improve and it is proof that they worked as each experiment improved on the previous one.

I would consider my experiment very successful as I have improved on my error until a final inaccuracy of merely 0.373% in the power.

If I were to perform the experiments again, I would include more values of 1/V so that I could construct an even more accurate line of best fit, and hopefully achieving the exact value for the lens’s power.