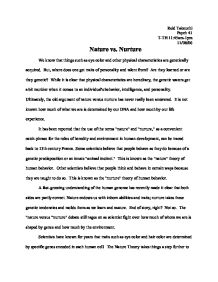 Reid Takeuchi Psych 41 T-TH 11:45am-1pm 11/08/06 Nature vs. Nurture We know that things such as eye color and other physical characteristics are genetically acquired. But, where does one get traits of personality and talent from? Are they learned or are they genetic? While it is clear that physical characteristics are hereditary, the genetic waters get a bit murkier when it comes to an individual's behavior, intelligence, and personality. Ultimately, the old argument of nature versus nurture has never really been answered. It is not known how much of what we are is determined by our DNA and how much by our life experience. It has been reported that the use of the terms "nature" and "nurture," as a convenient catch-phrase for the roles of heredity and environment in human development, can be traced back to 13th century France. ...read more.

Nature endows us with inborn abilities and traits; nurture takes these genetic tendencies and molds them as we learn and mature. End of story, right? Not so. The "nature versus "nurture" debate still rages on as scientist fight over how much of whom we are is shaped by genes and how much by the environment. Scientists have known for years that traits such as eye color and hair color are determined by specific genes encoded in each human cell. The Nature Theory takes things a step further to say those more abstract traits such as intelligence; personality, aggression, and sexual orientation are also encoded in an individual's DNA. The search for "behavioral" genes is the source of constant debate. Many fear that genetic arguments might be used to excuse criminal acts or justify divorce. ...read more.

Rather it "develops out of a constant and active process of the individual's transactions with changing internal and external influences, including biological changes and changes in historical conditions of society." If environment didn't play a part in determining an individual's traits and behaviors, then identical twins should, theoretically, be exactly the same in all respects, even if reared apart. But a number of studies show that they are never exactly alike, even though they are remarkably similar in most respects. So, was the way we behave engrained in us before we were born? Or has it developed over time in response to our experiences? Researchers on all sides of the nature versus nurture debate agree that the link between a gene and a behavior is not the same as cause and effect. While a gene may increase the likelihood that you'll behave in a particular way, it does not predispose one to behave in a certain way. ...read more.