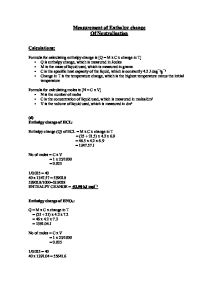 So therefore, I can conclude that the enthalpy of neutralisation of an acid with an alkali does not depend on the particular acid or alkalis providing both are strong. My results clearly show this as all acids and alkalis were strong and gave approximately similar values. However, you have to use more moles of weak acid to achieve the same extent of neutralisation compared to using a strong acid, assuming both acids are of the same basicity. Hence, for a weak acid, the enthalpy change per mole of weak acid is less because you used more weak acid than strong acid to achieve the same extent of neutralisation. (f) Evaluation The values for Hydrochloric acid and Nitric acid were -53.90 kJmol�� and -55.64 kJmol�� respectively. These were relatively close to the expected value of -57 kJmol�� however; the value for Sulphuric acid was not. The enthalpy change of sulphuric acid was of -66.68 kJmol�� and was far from the value I was expecting. ...read more.

One source of error could have been that while reading the temperature off of the thermometer, I could have read it wrong or the mercury in the thermometer was broken up. I also may have held the pipette from the bulb which would have affected the volume that it holds and therefore alter my results. Another error is that there may have been many inaccurate burette readings. This would clearly affect the temperature change of the reaction as it would mean that more of the reaction has taken place at the amount of liquid stated, and so the rate would be faster than it should be at that point. As a result, the values for the enthalpy change for one mole of neutralisation would be different, making my results inaccurate. To further improve my experiment I could read the thermometer and burette more accurately, allowing a much smaller margin of error. Also I would deter from holding the pipette from the bulb, as this would seriously affect the volume that it holds, and in turn make my experiment void and of little use, as it wouldn't be entirely accurate. ?? ?? ?? ?? ...read more.