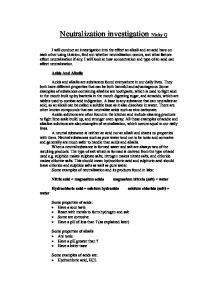 Neutralization investigation Nicky G I will conduct an investigation into the effect an alkali and an acid have on each other using titration, find out whether neutralization occurs, and what factors effect neutralization if any. I will look at how concentration and type of an acid can affect neutralization. Acids And Alkalis Acids and alkalis are substances found everywhere in our daily lives. They both have different properties that can be both harmful and advantageous. Some examples of substances containing alkaline are toothpaste, which is used to fight acid in the mouth built up by bacteria in the mouth digesting sugar, and antacids, which are tablets used to combat acid indigestion. A base is any substance that can neutralize an acid, so an alkali can be called a soluble base as it also dissolves in water. There are other known compounds that can neutralize acids such as zinc carbonate. Acidic solutions are often found in the kitchen and include cleaning products to fight lime scale build up, and stronger oven spray. All these examples of acidic and alkaline solutions are also examples of neutralization, which occurs equal in our daily lives. A neutral substance is neither an acid nor an alkali and shares no properties with them. Neutral substances such as pure water tend not to be toxic and corrosive and generally are much safer to handle than acids and alkalis. When a neutral substance is formed water and salt are always two of the resulting products. The type of salt which is formed is derived from the type of acid used e.g. sulphide makes sulphate salts, nitrogen makes nitrate salts, and chloride makes chlorine salts. This should mean hydrochloric acid and sulphuric acid should leave chloride and sulphide salts as well as pure water. Some examples of neutralization and its products found in labs: Nitric acid + magnesium oxide magnesium nitrate (salt) ...read more.

After each type concentration and type of acid I have measured I will wash the burette out with distilled water. I will make sure the water reaches up to the 50cm3 mark on the burette so that the whole burette is cleaned and will than turn the tap at the bottom of the burette so that no water is left in the burette, as if water was left in it the measurement of the acid added would not be accurate. I will do this process for all of the different concentrations for 0.1M, 0.5M, 1M, 1.5M, 2M sulphuric acid, and I will than move onto hydrochloric acid, where I will repeat the same process. The range of concentrations I am using is sensible as they are just different enough to show clear differences in the results. I have already planned and attempted a preliminary test for hydrochloric acid, 1 molar. However, this test did not work well as I found the substance did not turn pink and therefore no neutralization took place. I decided that the most likely reason for this was that the acids were accidentally contaminated in some way. Unfortunately, there was nothing I could think of to change my method to prevent this happening again as I was not entirely sure that this was the reason for the problem, and I could not think of anything that would help prevent this happening again except to be extra careful about which substance I am using. Variables And Fair Test The variables that will effect the investigation are the amount of sodium hydroxide that is put into the beaker to begin with, the amount of hydrochloric acid and sulphuric acid added to this, and the ionic composition (strength) of the acids. However, if all of these things change throughout the investigation than the experiment will not be fair or accurate because it means I will be obtaining results for things I am not investigating, and not obtaining enough results to justify a conclusion for the aims I should be investigating. ...read more.

I think this because I know through my own knowledge that when acid rain falls into a river, lime is used to neutralize the acid. I predict that the concentration of the acid will be an important factor on the amount of acid needed to neutralize the alkali. The more hydrogen ions there are in a substance the stronger it will be on the pH scale. This works in a similar way molecules work in a solid object. The denser the molecules in a solid are, the stronger the bonds, and the object will be. Acids work the same, except instead of solidifying they become more acidic as its molecules become stronger. I predict that less hydrochloric acid will be needed to neutralize 25cm3 of sodium hydroxide than sulphuric acid. I think this because I know that sulphuric acid has a more sparse arrangement of ions, and so when it is added to another aqueous solution like sodium hydroxide only some of its acid molecules will be strong enough to form ions. Hydrochloric acid has denser arrangement of ions so I predict less of this will be needed because the molecules form ions much easier. The sodium hydroxide will remove all of the H+ ions and convert them into water, so the more and stronger the H+ ions are the easier neutralization can take place and the less acid is needed. I also know that hydrochloric acid has a stronger acidic pH than sulphuric acid, so if I base my prediction on the accuracy of the pH scale I reach the conclusion that less hydrochloric acid is needed to neutralize 25cm3 of sodium hydroxide. The only factor that affects neutralization is the amount of hydrogen and hydroxide ions present. This can be shown best in an ionic equation as shown below. These equations show that the amount of hydrogen and hydroxide ions present need to be equal in order for neutralization to take place. Using this information I can determine the ratio of the acids, and then work out how much acid is needed to neutralize the alkali. ...read more.