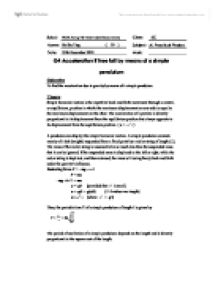 Objective To find the acceleration due to gravity by means of a simple pendulum.

G4 Acceleration if free fall by means of a simple pendulum

To find the acceleration due to gravity by means of a simple pendulum.

for each experiment by using the above formula:

The experiment result of is 2.96

smaller than the expected value 9.81 ms-2

It is quite accurate as the experiment value does not deviate a lot from the expected value.

There are some limitations in the experiment due to instrumental limit (reading error) which cannot be reduced by repeating the experiment.

The percentage error due to the limitation of measuring length:

Find the percentage error of each measurement by using the above formula:

Average value of the percentage error due to this limitation:

Using this method to carry out the experiment can prevent some human error caused by the original. It would not consist of the error of reaction time. And also, the data can be obtained by the function of software. It prevents lots of calculating error of human. The valued obtained is much accurate than the original one.

Ans: It is an alternative method to find the acceleration due to gravity with the help of ticker-tape timer 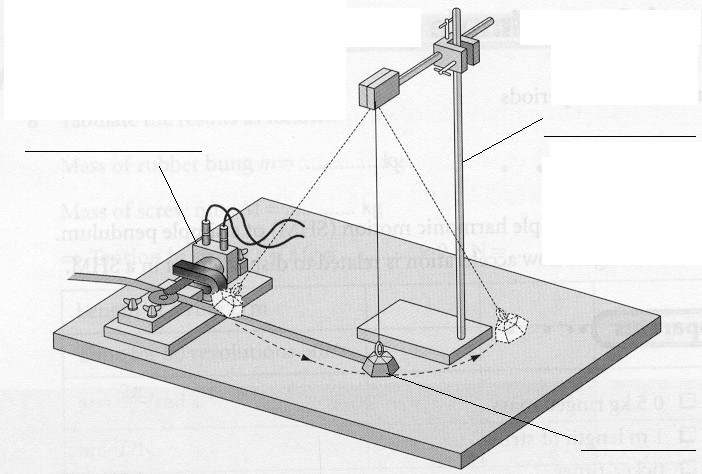 (The length of the string is not necessarily known.)

The separation (x) between the dots printed by the ticker-tape timer, the time for each of the position can help find the instantaneous velocity of the corresponding time by working out the slope of x-t graph plotted. Plot a suitable v-t graph. Again at suitable points on the v-t graph, find the acceleration by working out the slopes. Period of the oscillation can be found.

The acceleration due to gravity is found.

By means of a simple pendulum, the acceleration of free fall was found to be ( 9.52