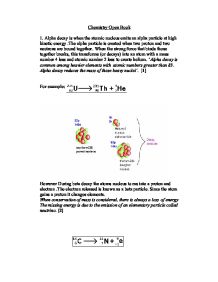 Chemistry Open Book 1. Alpha decay is when the atomic nucleus emits an alpha particle at high kinetic energy .The alpha particle is created when two proton and two neutrons are bound together. When the strong force that binds those together breaks, this transforms (or decays) into an atom with a mass number 4 less and atomic number 2 less to create helium. 'Alpha decay is common among heavier elements with atomic numbers greater than 83. Alpha decay reduces the mass of these heavy nuclei'. [1] For example: However During beta decay the atoms nucleus turns into a proton and electron .The electron released is known as a beta particle. Since the atom gains a proton it changes elements. When conservation of mass is considered, there is always a loss of energy The missing energy is due to the emission of an elementary particle called neutrino. [2] Nuclear fission is when a heavy atomic nucleus is bombarded with a neutron to give two elements of similar mass for example when ...read more.

3. Nuclear fission is splitting an unstable heavy atom in to two lighter nuclei which are roughly equal in size, this process releases vast quantities of energy and with neutrons can cause further fusion in other nuclei, leading to a chain reaction. Nuclear fusion is combining smaller nuclei to form heavier nuclei e.g. hydrogen nuclei's to create a helium nuclei, this process also releases lots of energy and only happens in the sun as it has the right temperature to fuse the nuclei's together. Energy released in nuclear fission can be harnessed to generate electricity but if all the energy is released at once it can cause an atomic b**b and that's why we have nuclear power plant to control the reaction. Inside nuclear reactor uranium atoms are splitting apart in a controlled chain reaction. To keep splitting regulated control rods are used so the reaction doesn't go to quick control rods absorb the neutrons and depending on were you put the [200] control rod you can decrease the rate of reaction just enough so that the reaction occurs. ...read more.

However it also has its flaws fission produces radioactivity which can make people ill and in most cases kill them, another disadvantage is that the nuclear reactor can go out of control creating a meltdown which releases incredible amount of radioactivity devastating people all around. Nuclear reactors are also short lived and can live for 40-50 years. Advantages for using fusion are that the reactants, deuterium and tritium, are readily available in nature.They are more environmentally friendly than fossil feuls and fission. fusion is much safer to use than fission. 4. Although nuclear fusion is a safe source of power, scientists have yet to figure out ways to match the conditions that the sun has on earth. Doing so would supply the earth with millions of years of energy. 'The ITER is being built at Cadarache in the south of France and should be ready for operation in 2015.'[5] http://www.solcomhouse.com/nuclear.htm http://www.thetartan.org/2007/4/30/scitech/work/ 1. Nuclear reactions, SAC Chemical ideas - second addition George Burton et al, Heinemann, 2000, page 15, ISBN: 9780435631208. 2. http://library.thinkquest.org/27954/alpha.htm Alpha and beta decay reaction, website is owned by think quest.com 3. ...read more.