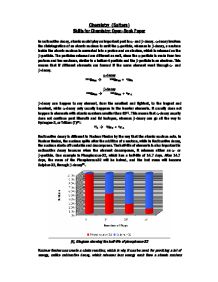 Chemistry (Salters) Skills for Chemistry: Open-Book Paper In radioactive decay, atomic nuclei play an important part in ?- and ?-decay. ?-decay involves the disintegration of an atomic nucleus to emit the ?-particle, whereas in ?-decay, a neutron inside the atomic nucleus is converted into a proton and an electron, which is released as the ?-particle. The particles released are different as well, since the ?-particle is made from two protons and two neutrons, similar to a helium-4 particle and the ?-particle is an electron. This means that if different elements are formed if the same element went through ?- and ?-decay. ?-decay 224Ra88 --> 220Rn86 + 4He2 ?-decay 225Ra88 --> 225Ac89 + 0e--1 ?-decay can happen to any element, from the smallest and lightest, to the largest and heaviest, while ?-decay only usually happens in the heavier elements. It usually does not happen in elements with atomic numbers smaller than 83[1]. This means that ?-decay usually does not continue past Bismuth and its' isotopes, whereas ?-decay can go all the way to ...read more.

The fission products are better at absorbing neutrons than the uranium, which makes the reaction die out. Because of this, around 96% of the fuel put in is not used[9]. The radioactive waste is then stored underwater because the gamma (?) rays reflect off the water molecules and use up their energy in the water. The waste can either be kept underwater, or they can be put into special casts deep underground. Unfortunately, the UK does not have the facilities to keep them underground. Nuclear fusion happens when two or more atomic nuclei join together to form a heavier element. Nuclear fusion can either release or absorb energy. Fusion reactions are preferred because they are safer than fission reactions as only a small amount of fuel is put in and the length of radioactivity is shorter as well. A disadvantage of using nuclear fusion is that is still produces greenhouse gases. Although nuclear power is supposed to be an alternative to fossil fuels, methane is formed inside the tokamak by the helium particles eroding the carbon tiles of the inner lining. ...read more.