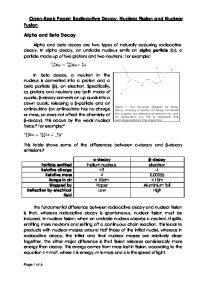 Open-Book Paper: Radioactive Decay, Nuclear Fission and Nuclear Fusion Alpha and Beta Decay Alpha and beta decay are two types of naturally occurring radioactive decay. In alpha decay, an unstable nucleus emits an alpha particle (?), a particle made up of two protons and two neutrons. For example:1 2 In beta decay, a neutron in the nucleus is converted into a proton and a beta particle (�), an electron. Specifically, as protons and neutrons are both made of quarks, �-decay converts an up quark into a down quark; releasing a �-particle and an antineutrino (an antineutrino has no charge or mass, so does not affect the chemistry of �-decay). This occurs by the weak nuclear force.3 For example:4 This table shows some of the differences between ?-decay and �-decay emissions:5 ?-decay �-decay Particle emitted helium nucleus electron Relative charge +2 -1 Relative mass 4 0.00055 Range in air < 10cm < 10m Stopped by Paper Aluminium foil Deflection by electrical field Low High The fundamental difference between radioactive decay and nuclear fission is that, whereas radioactive decay is spontaneous, nuclear fission must be induced. In nuclear fission, when an unstable nucleus absorbs a neutron, it splits, emitting more neutrons and setting off a continuous chain reaction. ...read more.

By E = mc2, this gives out 2.86x10-12 J per fusion. On earth, for this to happen the nuclei must be in ionised plasma at temperatures of 15x108 �C. The problem with this is that it must be kept away from the walls of the container to minimise heat loss. To do this, a tokamak is used. This uses magnetic currents to keep the plasma from touching the walls (see Fig. 417). The walls are made of graphite, which is not harmed by the temperature. Both fission and fusion have several advantages and disadvantages for use in producing electricity: Advantages Disadvantages Fission * Uranium-235 produces 3.7 million times the energy per unit mass as coal18 * Uranium-235 will not run out on the same timescale as fossil fuels19 * It produces no gases that directly cause global warming * Fission produces waste radioactive actinides, which are dangerous for thousands of years * Fission has led to disasters such as Chernobyl in 1986, which caused over 4000 deaths20 Fusion * The fuel - hydrogen - is abundant * The radioactive waste products have half-lives hundreds of years less than those of fission * Fusion is safer than fission, as only small amounts of products are used * It produces ...read more.