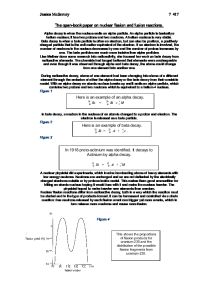 The open-book paper on nuclear fission and fusion reactions. Alpha decay is when the nucleus emits an alpha particle. An alpha particle is basically a helium nucleus; it has two protons and two neutrons. A helium nucleus is very stable. Beta decay is when a beta particle is often an electron, but can also be positron, a positively charged particle that is the anti-matter equivalent of the electron. If an electron is involved, the number of neutrons in the nucleus decreases by one and the number of protons increases by one. The beta particles are much more incisive than alpha particles. Lise Meitner done some research into radioactivity, she focused her work on beta decay from radioactive elements. The chemists had longed believed that elements were unchangeable and even though it was observed through alpha and beta decay, the atoms could change from one element into another one. During radioactive decay, atoms of one element had been changing into atoms of a different element through the emission of either the alpha decay or the beta decay from their unstable nuclei. ...read more.

A star obtains its energy by fusing together light nuclei to form heavier nuclei; in this process, mass (m) is converted into energy (E) in accordance with Einstein's formula, E=mc2, in which c is the speed of light. The closest star to earth consists of hydrogen which is converted into helium in the nuclear fusion reactions. Figure 6 A nuclear fusion reaction is the process which two small nuclei combine under extreme temperatures and pressures to form larger nuclei's. A small amount of mass is lost in fusion and transformed into energy. Under proper conditions, two deuterium nuclei may undergo fusion and produce a helium nucleus. Figure 7 Lithium could be produced by the action of the energenetic cosmic rays on elements like carbon, nitrogen and oxygen. A small amount of lithium can be synthesised in supernovae, in which the heavier elements can be created. The nuclei of hydrogen are being formed into helium and these helium nuclei's are being fused into lithium. ...read more.

Figure 9 Figure 9.1 The characteristics of nuclear fusion are the process by which multiple atomic particles join together to form a heavier nucleus. Fusion reactions power the stars and produce all but the lightest elements in a process called nucleosynthesis. The fusion of light elements in the stars releases energy. When the fusion reaction is a sustained uncontrolled chain, it can result in a thermonuclear explosion; it can be generated by a hydrogen b**b. Reactions which are not self-sustaining can still release considerable energy, as well as large numbers of neutrons. Figure 10 The electrostatic force caused by positively charged nuclei is very strong over long distances, but at short distances the nuclear force is stronger. As such, the main technical difficulty for fusion is getting the nuclei closes enough to fuse. When fusion reactions undergo the right conditions, deuterium and tritium atom fuse to form a helium atom and a neutron. Figure 11 If the fusion reaction could be controlled on earth, the energy given out could potentially be used to generate the electricity. The only problem that the scientists come across is to reproduce the fusion reactions under safely managed conditions. ...read more.