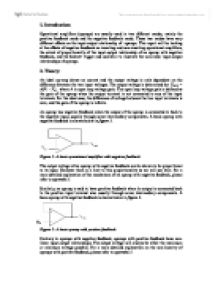 An ideal op-amp draws no current and the output voltage is only dependent on the difference between the two input voltages. The output voltage is determined by: VOUT = A(V+ - V-),  where A is open loop voltage gain. The open loop voltage gain is defined as the gain of the opamp when the output terminal is not connected to any of the input terminals. For the ideal case, the difference of voltage between the two input terminals is zero, and the gain of the opamp is infinite. 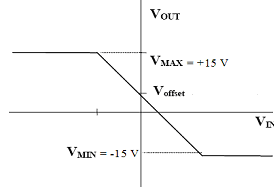 The output voltage was measured from the oscilloscope to be -15V. This was because the input was 0V and the gain of the opamp had to be infinite because of the negative feedback. However, the circuit also had to satisfy the constraint that the magnitude of the maximum and minimum allowable voltages were +15V and -15V respectively. Since this was an inverting opamp, the output was driven to -15V.

3.2 Negative feedback in a non-inverting amplifier:

For the opamp above, VOUT = (1+RF/R)VIN , where VIN and VOUTare the input and output voltages of the opamp respectively.

Derivation of formulae for the output voltage of an inverting opamp with negative feedback:

Derivation of formulae for the output voltage of a non-inverting opamp with negative feedback: