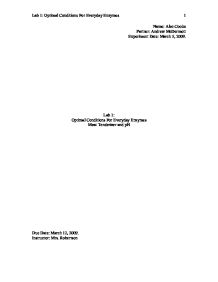 Name: Alec Cooke Partner: Andrew McDermott Experiment Date: March 5, 2009. Lab 1: Optimal Conditions For Everyday Enzymes Meat Tenderizer and pH Due Date: March 12, 2009. Instructor: Mrs. Robertson Introduction Enzymes are proteins that speed up reactions in living systems by lowering the activation energy of these reactions, without changing the outcome of the products. A protease is a type of enzyme that specializes in the breaking down of complex polypeptide bonds, such as the ones in gelatin. Flavour and colour molecules are trapped in the gelatin by its helical structure. When an enzyme breaks down gelatin, the colour and flavour molecules are released. The amount of colour or flavour released by the gelatin can be quantitatively analyzed to determine the efficiency of the enzyme. Since flavour is hard to test for, the enzyme will be tested using only the amount of colour released by the gelatin. Enzymes will be mixed with gelatin in seven different environments with constant temperatures, but different pH levels, ranging from very acidic (1) to very basic (13). The amount of colour released by the gelatin in each environment will then be tested by a spectrophotometer. The results will show how well the enzyme functions in the varying levels of pH. ...read more.

Gelatin is a substance composed of mainly protein, as is meat. A major site of protein decomposition is in the small intestine. This is so that proteins can be broken down into amino acids, or peptide chains small enough to be absorbed by the capillaries is the intestine, into the blood stream. The environment in the small intestine is basic, this is where an enzyme called Trypsin finishes the job that Pepsin started in the stomach, of breaking down proteins. Since Trypsin is the enzyme that finished the job and prepares proteins for the blood stream, it must be more efficient than Pepsin. The purpose of meat tenderizer is to put stress on the bonds between amino acids forming the proteins in meat or gelatin, making it easier to chew, eat, and digest. This is why it mimics the function of Trypsin, by breaking down proteins best in a basic environment. It makes sense that since our body's main enzyme for breaking down proteins works in a basic environment, so should an enzyme made for the same function outside of the body. The enzyme worked so well in the pH of 9.79 because it is so close to the pH in the small intestine due to the presence of the alkaline glycoproteins and bicarbonate ions. 1 Lab 1: Optimal Conditions For Everyday Enzymes ...read more.