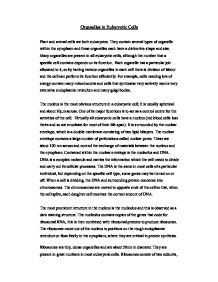 Organelles in Eukaryotic Cells Plant and animal cells are both eukaryotes. They contain several types of organelle within the cytoplasm and these organelles each have a distinctive shape and size. Many organelles are present in all eukaryotic cells, although the number that a specific cell contains depends on its function. Each organelle has a particular job allocated to it, so by having various organelles in each cell there is division of labour and the cell can perform its function efficiently. For example, cells needing lots of energy contain many mitochondria and cells that synthesise very actively need a very extensive endoplasmic reticulum and many golgi bodies. The nucleus is the most obvious structure in a eukaryotic cell; it is usually spherical and about 10�m across. One of its major functions is to act as a control centre for the activities of the cell. Virtually all eukaryotic cells have a nucleus (red blood cells lose theirs and so are enucleate for most of their life-span). It is surrounded by the nuclear envelope, which is a double membrane consisting of two lipid bilayers. The nuclear envelope contains a large number of perforations called nuclear pores. These are about 100 nm across and control the exchange of materials between the nucleus and the cytoplasm. Contained within the nuclear envelope is the nucleolus and DNA. DNA is a complex molecule and carries the information which the cell needs to divide and carry out its cellular processes. ...read more.

Phospholipids are made up of fatty acids, glycerol and phosphate, and make fresh membrane by attaching themselves to the inner side of the membrane and flipping inwards. They provide a waterproof layer as they are made out of lipids, which are hydrophobic. Smooth ER also contains enzymes for detoxifying chemicals, including drugs and pesticides and it acts as a storage site for calcium in skeletal muscle cells. It is extensive in cells that secrete steroid hormones and is involved in the detoxification of urea in the liver. When smooth ER is broken into small pieces, it reseals into vesicles, called microsomes. Once lipids and proteins have been made in the endoplasmic reticulum, they pass to the golgi apparatus in 'transport vesicles.' Golgi apparatus are only found in animal cells. The golgi apparatus is a stack of flattened, membranous sacs that are important in packaging macromolecules for transport elsewhere in the cell. Numerous smaller vesicles containing these packaged macromolecules surround the stack. The enzymatic or hormonal contents of lysosomes, peroxisomes and secretory vesicles are packaged in membrane-bound vesicles at the periphery of the golgi apparatus. When proteins and lipids reach the golgi body they first pass through the cis-golgi network, which returns any wrongly exported proteins or lipids back to the endoplasmic reticulum. Proteins and lipids that aren't returned pass through the stack of cisternae. This stack of cisternae has a very large surface area for chemical reactions. ...read more.

These are about 1mm high and 0.08mm in diameter. Some cells have only a few microvilli on their surface but others such as the absorptive epithelial cells in the gut and cells lining nephrons in the kidney can have several thousand on their surface. A greater surface area allows the increased passage of nutrients across the cell membrane so absorption can take place at a faster rate. The core of microvilli contains a group of actin microfilaments that run along their length. Actin is a type of protein and it helps provide a skeletal core to maintain the structure of the microvillus. The filaments can also contract to help speed up absorption. On the outside surface of the microvillus is a glycoprotein containing coat which is known as the glycocalyx. The glycoproteins of the glycocalyx include enzymes which are important for the final breakdown of nutrients prior to their absorption by the cell. Each organelle has a very specific structure, which enables it to carry out its function. Although each organelle has a different structure, there are several common features. Most organelles are enclosed within a membrane to control exchange of material between it and the cytoplasm. Organelles that are designed to carry out chemical reactions try to ensure that they have the maximum surface area for these reactions to take place on. Although each organelle in a eukaryotic cell has a separate function, organelles are very interdependent and work together so that many tasks can be performed at once. If organelles start failing to function then a cell will no longer be able to carry out the processes it needs to survive. ...read more.