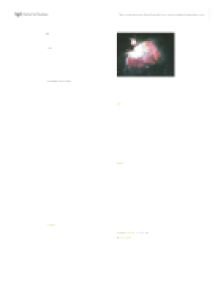 Origin of the universe as one entity.

Origin of the universe as one entity

One of the mysteries that have confused astronomers and physicists for centuries is how the life started. As you read on you’ll be astounded; baffled.

As Edwin Hubble sat late night observing the stars with a giant telescope, he made a miraculous discovery: the light from them was shifted to the red end of the spectrum and that this shift was most pronounced as the further a star was from Earth. This discovery made an electrifying effect on the world and that’s when scientists began testing this theory. The discovery meant if the light from the stars were tending towards red than this meant the universe was expanded. After yeas of research they’d finally found the answer to the question that has baffled scientists for millenniums: How did the universe first begin. Being a

: A new star forming out of a cloud of gas and dust.

The illuminating stars you and me both see at night were just as was the whole universe when it first formed. God has said in the Qu’ran:

"Then He turned to the heaven when it was smoke..." 41:111
because the Earth and the heavens have been formed from

The Qu’ran in this verse has thoroughly explained a mystery that was new to the greatest physicists. This verse shows that at

Another scientist has contended: "Somebody who did not know something about nuclear physics fourteen hundred years ago could not, I think, be in a position to find out from his own mind for instance, that the Earth and heavens had the same origin."

So there you go my fellow brothers and sisters, scientists searched for an answer to this mystery but they had no clue that anything like this would be in the Qu’ran. Something, which took centuries to prove, was already proved in the Qu’ran and no one, not even the disbelievers can say that Allah does not exist. I mean how else could someone 14 centuries ago know this when it took our generation advanced and sophisticated equipment to understand.

By Affaq Razaq and Nafe Anam (who helped a lot)