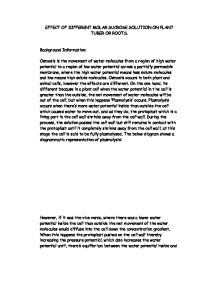 the turgidity should happen in the 0.2 molar solution, this is because there's a higher osmotic concentration in the 0.2 molar solution than the cell, it thus causes the drawing in of water via the living cells of the potato which act as the semi permeable membrane, as the solution diffuses into the potato it enters the vacuole of the potato cell, which increases the volume of cell sap, which in turn causes an increase in pressure as the contents of the cell pushes against the cell wall, which prevents it from bursting unlike that of the animal cell. The pressure exerted is turgor pressure and is counteracted by a pressure equal in magnitude but in the opposite direction of turgor to a point where its equalled to the resistance of the cell, thus 0.2 molar gains mass due to the factors of turgor pressure. More also, I predict that for a solution of 0.8 0r 1.0 molar, the mass is likely to decrease because of the term plasmolysis, which happens due to the fact there's a lower osmotic concentration in theses molar solutions than inside the cell, hence movement of water out of the cell down the gradient. The reason for this prediction is that, as the cell loses it's water the cytoplasm shrinks and the plasmodesmata gets detached from the cell wall. From the secondary source/ research and based on my hypothesis, the result should backup the hypothesis as well as highlight the noticeable effect of osmosis on the different molar solutions. For example which molar solution would be Hypotonic i.e. where the cells of the plant tuber/ root takes in water because there's more solute in the cell than the outside solution which then causes water molecules to pass into the cell by osmosis and swell up. Another prediction, which I hope will reflect in the result is the molar solution that appears to be Hpertonic i.e. ...read more.

the hardness (parsnips), stringiness (sweet potato) or softness (Swede). More also, the freshness might affect the result in that the longer the tuber/ root has been on the shelf the less water present in its cells, in addition the errors might have happened due to % errors that happened in the length measurement when using the ruler. The % error can be worked out, and expressed as; 0.5 / 3 * 100% = where 0.5cm is the error of ruler, 3cm is the length of the cut pieces. In terms of the apparatus with the exception of the ruler, had no major errors because for example the burette has an insignificant error due to its 0.05cubic cm degree of accuracy Having looked at the results critically, there could have been improvements to help give more reliable and more accurate results. One of the improvements could have been allowing more than enough time difference between the sets of experiment so as to create more time to move the pieces from test tube to balance if weighing, although I mentioned I would allow enough time in the planning, this became rather impossible due to lack of time. Another improvement could be to use more types of molar strength solutions that would allow the specific strength at which the effects of osmosis occur, also experimenting for longer and repeating the sets about 10 times will surely increase reliability, produce sufficient accurate result, eliminate any chance of errors in the mass 9gained or lost) and help identify the saturation point (where the cut tubers/ roots cannot take in water any more) and dehydration point (where the cut tubers/ roots cannot lose water anymore) as well as test similar types of plant tuber/ root.. Furthermore, I could have used a microscope to look at the cut pieces which would show in great detail the full extent the molar strength had on the process of osmosis, but having said I'll need to devise a method to get the cells. ...read more.