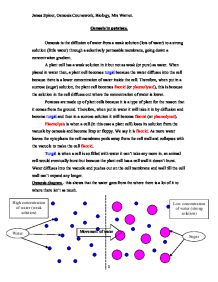 Osmosis in potatoes. Osmosis is the diffusion of water from a weak solution (lots of water) to a strong solution (little water) through a selectively permeable membrane, going down a concentration gradient. A plant cell has a weak solution in it but not as weak (or pure) as water. When placed in water then, a plant cell becomes turgid because the water diffuses into the cell because there is a lower concentration of water inside the cell. Therefore, when put in a sucrose (sugar) solution, the plant cell becomes flaccid (or plasmolysed), this is because the solution in the cell diffuses out where the concentration of water is lower. Potatoes are made up of plant cells because it is a type of plant for the reason that it comes from the ground. Therefore, when put in water it will take it in by diffusion and become turgid and then in a sucrose solution it will become flaccid (or plasmolysed). Plasmolysis is when a cell (in this case a plant cell) loses its solution from the vacuole by osmosis and become limp or floppy. We say it is flaccid. As more water leaves the cytoplasm the cell membrane peels away from the cell wall and collapses with the vacuole to make the cell flaccid. ...read more.

I would also use more rulers around the chips like to box them in so as to make the chip's size more accurate and when measuring the solutions I would use a more precise measuring instrument like a mm measuring cylinder that leaks the solution through bit by bit. This would mean that the results would be more reliable in the way that the chips masses would be more accurate to start with and at the end too. It would also make the average percentage change in mass more accurate because the chips would be more similar and not almost similar. By changing the variable form concentration to something else you would get different results for a different prediction because it wouldn't be to see what the concentration is in the potato chip. Here is an example; for this example I will change the time in the solution to see how long before the potato chip couldn't diffuse any more of its solution. In this experiment I would set up 10 or so beakers of one fixed concentration and set them off at the same time but take the chips out of the beakers at different times. I would then repeat this several times and then do the same write up as above changing the correct pieces to make sense of the experiment. James Spicer, Osmosis Coursework, Biology, Mrs Warren. 1 ...read more.