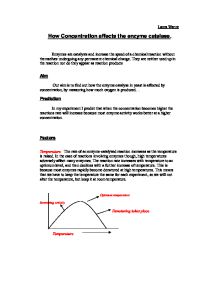 Our aim is to find out how the enzyme catalyse in yeast is affected by concentration, by measuring how much oxygen is produced.

Laura Warne How Concentration affects the enzyme catalase. Enzymes are catalysts and increase the speed of a chemical reaction without themselves undergoing any permanent chemical change. They are neither used up in the reaction nor do they appear as reaction products Aim Our aim is to find out how the enzyme catalyse in yeast is affected by concentration, by measuring how much oxygen is produced. . Prediction In my experiment I predict that when the concentration becomes higher the reactions rate will increase because most enzyme activity works better at a higher concentration. Factors Temperature: The rate of an enzyme-catalyzed reaction increases as the temperature is raised. In the case of reactions involving enzymes though, high temperatures adversely affect many enzymes. The reaction rate increases with temperature to an optimum level, and then declines with a further increase of temperature. This is because most enzymes rapidly become denatured at high temperatures. This means that we have to keep the temperature the same for each experiment, so we will not alter the temperature, but keep it at room temperature. Optimum temperature Increasing activity Denaturing takes place Temperature Concentration: At low concentrations, collisions between enzyme and substance molecules are fewer and reaction occurs slower. As the concentration increases, the reaction rate increases proportionately as collisions between enzyme molecules and reactants are more often. ...read more.

When it is all prepared connect the bung and tube to the gas syringe ready to attach it to the flask. Firstly add the Hydrogen Peroxide to the cronical flask and then the yeast, and immediately place the bung over the flask and start the stopwatch ready to record the amount of oxygen produced at every 10second intervals, having your results table at the ready. We repeated this method with the 5 different concentrations: > 0.25 > 0.5 > 0.75 > 1 > 1.5 Making sure to keep the same quantities of each the hydrogen peroxide and the yeast, insuring the experiment is fair. Make repeats of each concentration at least twice to get accurate results to be able to compare with. Preliminary Work Firstly we gathered up all the equipment and set it up. Then we used a bora to cut out circles of potato measured exactly to 1g on a mass balancer. We added this to the test tube and then added the buffer solution, which was ph 7. We then added the hydrogen peroxide to the test tube instantly adding the bung to the top on the test tube to collect the oxygen in the measuring cylinder. We measured the mount of oxygen every 10 seconds after that we read off the measuring cylinder and took down the results and we did this twice for a repeat result to make it more accurate and we did this for yeast and liver. ...read more.

I would have preferred to have repeated the experiment 3 times at least. Fortunately, on this occasion, our repeat results proved to be the same or similar to that of the original experiment. This means that the probability of these results being accurate is much greater. There is some thing I would have liked to change in this experiment, but it was not possible. The equipment we used was, I believe, good enough for experiment, although I think it could have better, so could have had more accurate results. One problem we had was that we were unable to clean and dry the equipment sufficiently enough, and so this meant that it was not quite a fair test as it would have slightly diluted the hydrogen peroxide and it would not have given is the more accurate results, if we could dry it. This could have been overcome by using separate boiling tubes for each experiment. Also we found that the yeast stuck to the side when we first put it in, which meant that it did, sometimes, not touch the hydrogen peroxide at the bottom of the test tube, as quickly this again affecting the efficiency of our results. Another problem we had was getting the bung on top of the boiling tube in time to record our results; this meant we missed the first few second of the reaction. The experiment could have also been better if we measure the amount of oxygen on a greater scale, so that the results could have been more accurate. ...read more.