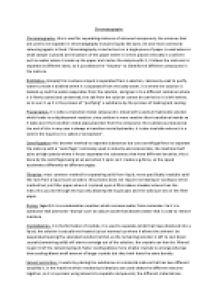 ﻿Chromatography Chromatography- this is used for separating mixtures of coloured compounds, the mixtures that are used to be separate in chromatography includes liquids like dyes, ink and most commonly colouring agents in food. Chromatography is carried out on a single piece of paper is used where a small sample is placed at the bottom of the paper where it is then placed vertically in a solvent such as water where it soaks up the paper and carries the sample with it, it allows the mixtures to separate at different rates, so it just allows the ?industry? to identify the different compounds in the mixture. Distillation- (simple) this is where a liquid is separated from a solution, commonly used to purify water to make it distilled where it is separated ...read more.

Centrifugation- this another method to separate substances but uses centrifugal force to separate the mixture with a ?centrifuge? commonly used in industry and science labs, the machine itself spins at high speeds where it forces separates the substances that have different densities, this is done by the centrifuge being at an axis when it spins so it creates a g-force, so the speed accelerates differently at different angles. Filtration- most common method for separating solid from liquid, more specifically insoluble solid like rock from a liquid such as water, this process does not require no heating or cooling or other method but just filter paper where it is placed upon a filter above a beaker where then the mixture is poured through the top only allowing the liquid pass and the solid just sits on the filter paper. ...read more.

liquid, faster cooling allows more smaller crystals to emerge whereas slow cooling allows small amount of larger crystals but they both have the same density. Solvent extraction- it works by placing the substances in a material mixture that has two different solubility?s, in the machine which mechanical vibrations are used shake the different mixtures together, so it is a process using solvents to separate compounds, the different materials are separated depending on their solubilities, so it makes the solution pure this can be done by using pivalic acid. Electrophoresis- it is the movement of charge particle within a liquid under the influence of a electric field, they are used to separate molecules depending on their size, shape and charge, it is also used to find the mass of an item. ...read more.