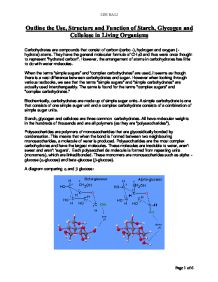 Outline the Use, Structure and Function of Starch, Glycogen and Cellulose in Living Organisms.

The human digestive process breaks down the starches into glucose units with the aid of enzymes, and those glucose molecules can circulate in the blood stream as an energy source. A well known classroom experiment to show the break down of starch by salivary amylase (an enzyme secreted by the salivary glands) involves chewing on a piece of bread for a while, it will begin to taste sweet because the enzymes in saliva are already beginning to break down the starch into glucose, a sugar. Starches consist of three hundred to one thousand ? -glucose units bonded together and is a mixture of two types of chain made from these ? -glucose units. The first type of chain is amylose, which forms roughly 20% of the starch. These chains are made by many ? -glucose molecules condensing together to form 1,4 glycosidic bonds, so producing long un-branched chains. As shown in the diagram below, these chains are arranged in a helical/coiled configuration as each monomer has a 'bulky side group', which has to be accommodated. The configuration of amylose: The second type of chain is amylopectin, which forms the other 80% of the starch (both the percentages for amylose and amylopectin vary from one species to another). ...read more.

These parallel cellulose chains form "ribbons" by bundling up called microfibrils. These microfibrils have a strong fibrous structure and they cluster to form macrofibrils. The macrofibrils have immense tensile strength and stability and are arranged in a gel like matrix of other smaller polysaccharides in plant cell walls. Even though human digestion cannot break down cellulose for use as a food, animals such as cattle and termites rely on the energy content of cellulose. They have protozoa and bacteria with the necessary enzymes in their digestive systems. Cellulose in the human diet is needed for fibre. Another example of cellulose in nature is the fact that wood consists of mostly cellulose. This makes cellulose the most abundant type of organic compound on the Earth. The diagram below shows the condensation of two ?-glucose monomers forming a portion of a cellulose molecule: Starch and cellulose are very similar in structure but only starches can be used as energy sources by the human body while cellulose cannot. Enzymes are important in the metabolism of foods, and these enzymes are very specific. They are somewhat like keys which will fit the geometry of the starch bonds, but not those of the cellulose bonds. ...read more.