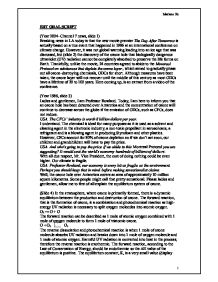 Ozone chemistry speech. Today, I am here to inform you that an ozone hole has been detected over Antarctica and the concentration of ozone will continue to decrease across the globe if the emission of ODCs, such as CFCs, does not reduce.

ERT ORAL SCRIPT (Year 2004- Channel 7 news, slide 1) Breaking news in LA today is that the new movie premier The Day After Tomorrow is actually based on a true event that happened in 1986 at an international conference on climate change. However, it was not global warming leading into an ice age that was discussed, but (slide 2) the discovery of the ozone hole that biologically dangerous ultraviolet (UV) radiation cannot be completely absorbed to preserve the life forms on Earth. Thankfully, unlike the movie, 24 countries agreed to abide to the Montreal Protocol on substances that deplete the ozone layer, which aimed to gradually phase out all ozone-destroying chemicals, ODCs for short. Although measures have been taken, the ozone layer will not recover until the middle of this century as most ODCs have a lifetime of 20 to 100 years. Here coming up, is an extract from a video of the conference. (Year 1986, slide 3) Ladies and gentlemen, I am Professor Rowland. Today, I am here to inform you that an ozone hole has been detected over Antarctica and the concentration of ozone will continue to decrease across the globe if the emission of ODCs, such as CFCs, does not reduce. ...read more.

The equilibrium constant, K, is a very small value (display K<10-4) given that the amount of ozone in the stratosphere equates to a blanket of approximately 3mm thick over the Earth's surface. The equilibrium lies to the far left, where the reactants are favoured. K has this expression: K=. (Slide 5) The ozone layer, that is approximately in the middle of the stratosphere (refer to the two graphs), contains the highest concentration of ozone and this can be explained by Le Chatelier's principle. At the lower and upper stratospheres, the conditions shift the equilibrium to favour the reverse reaction; therefore they have smaller amounts of ozone. The lower stratosphere has a lower temperature to the ozone layer (point to graph), so the equilibrium responds by shifting in the direction of the exothermic reaction and that is to the left, where K has an even smaller value. (Slide 6) At a higher altitude, the pressure drops; therefore the upper stratosphere has a lower pressure, shifting the equilibrium to the left to produce more gas molecules to increase the pressure and attempt to restore the system. Ozone cannot be found higher than the stratopause because the pressure is too low to allow for the forward reaction. ...read more.

ClONO2 + HCl � Cl2 + HNO3 In early spring when there is sunlight, UV radiation breaks molecular chlorine into chlorine atoms. Cl2 � Cl + Cl Since there is an increase amount of reactive chlorine, there will be an abundance of chlorine oxide from chlorine atoms reacting with ozone molecules (Cl + O3 � ClO + O2). This allows a reaction of chlorine oxide with another chlorine oxide that leads to a massive production of reactive chlorine atoms where they are able to destroy many more ozone molecules (point to the equations that show chlorine atoms as products). ClO + ClO � (ClO)2 (ClO)2 + sunlight �ClOO + Cl ClOO � Cl + O2 PSCs further increase the rate of the reverse reaction of the equilibrium, destroying ozone very effectively in a short period of time and it is this severe ozone depletion that has led to the development of an ozone hole. Therefore, I urge all countries to take action because the act of doing nothing will prolong the recovery of the ozone layer and we will be the ones to suffer the consequences at the end. Thank you. *Reminders: UV~ ultraviolet ODCs~ ozone-destroying chemicals CFCs~ chlorofluorocarbons PSCs~ polar stratospheric clouds **Many lines used at the beginning of the conference are actual quotes from The Day After Tomorrow. Marlene Hu 1 ...read more.

A very high detailed and quality scientific essay. The candidate includes a range of scientific equations that explain how CFCS and other substances destroy the ozone layer perfectly, and is able to discuss in chemical terms what impact this will ...

A very high detailed and quality scientific essay. The candidate includes a range of scientific equations that explain how CFCS and other substances destroy the ozone layer perfectly, and is able to discuss in chemical terms what impact this will be having on the ozone layer in the form of a powerpoint which not many candidates of this level would be able to do. The candidate is able to talk about chemistry in a convincing and knowledgeable way through the use of complex chemistry and good communication skills that I would only expect of the top A level candidates that have a very good understanding of the subject. All equations are correct.

This essay is presented in a talk format to explain the impact of cfcs on the ozone layer. This is good in this instance, because the candidate was required to do a talk in the form of a powerpoint. The candidate has researched the topic well and this shows from the amount of data and range of sources evident in the text, and explains the chemical reactions caused in the depletion of ozone to a very accurate level and in scientific terms discusses the impact this is having on the earth. The essay is very easy to follow due to the thorough explanation of each equation and the impact this has and what it leads to, and understand even if you did not have any prior chemistry knowledge. The conclusion at the end is only hinted at, but this is adequate in this instance because this is a talk, and the build up of points leads to the conclusion in itself which explains the development of the ozone hole.

All punctuation, grammar and spelling are done to a very high level as there are no sentences which are hard to read. The format of the essay is easy to read with clear paragraphing and relation to the powerpoint slides used in the talk.