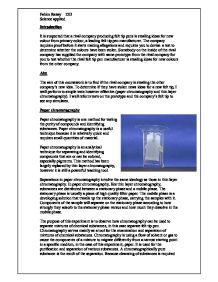 cm 1 Purple 7.8 cm 7.4 cm 0.94 Yellow gave Distance travelled by solvent Distance travelled by colour Rf values Yellow 7.8 cm 7.4 cm 0.94 Thin layer chromatography Thin-Layer Chromatography (TLC) is a simple and inexpensive technique that is often used to judge the purity of a synthesized compound or to indicate the extent of progress of a chemical reaction. In this technique, a small quantity of a solution of the mixture to be analyzed is deposited as a small spot on a TLC plate, which consists of a thin layer of silica gel (SiO2) or aluminum (Al2O3) coated on a glass or plastic sheet. The plate constitutes the stationary phase. The sheet is then placed in a chamber containing a small amount of solvent, which is the mobile phase. The solvent gradually moves up the plate via capillary action, and it carries the deposited substances along with it at different rates. The desired result is that each component of the deposited mixture is moved a different distance up the plate by the solvent. The components then appear as a series of spots at different locations up the plate. Substances can be identified from their so-called Rf values. The Rf value for a substance is the ratio of the distance that the substance travels to the distance that the solvent travels up the plate. Before attempting to apply TLC to the challenging problem of separating and identifying the felt tips, it is advisable to learn and practice the technique by applying it to mixtures that are easily visualized and separated. Inks provide an ideal practice vehicle for TLC because they normally contain several coloured components that separate nicely in common solvents such as water. ...read more.

Secondly, the water that was used in the beakers was not measured so we had two different volume of water in the two beakers, which once again meant that the results might not have been as accurate as it should have been. Thin layer chromatography The first graph shows the results that I got for the pen the company used and the second graph shows the results that I got for the prototype pen, which is from the rival company. After comparing the two graphs I can see that the thin layer chromatography has given a more accurate and I can distinguish that the two results are very corresponding. Thin layer chromatography has given me a more reliable result, which I can say know that the two pens are very identical and say that the rival company has stolen the other company's idea for a new primary colour. In addition, even I used different volume of water I have got an accurate result because TLC was the same size for the two tests I did and also the solvent front was the same measurement, which meant that the water reacted the ink nearly the same time. In conclusion I can say that by analysing the paper chromatography graphs and the thin layer chromatography graphs I articulate that the rival company has stolen their idea for a new primary colour. Risk assessment Glass equipment Beakers: when doing this you well be using three to four beakers and for safety reasons you should not be walking around with the beakers and also make sure that the beaker doesn't role down the table. Fahim Razay 12D Science applied ...read more.