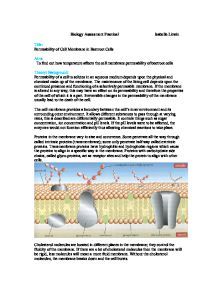 Biology Assessment Practical Isabelle Litwin Title: Permeability of Cell Membrane in Beetroot Cells Aim: To find out how temperature affects the cell membrane permeability of beetroot cells Theory/ Background: Permeability of a cell to solutes in an aqueous medium depends upon the physical and chemical make-up of the membrane. The maintenance of the living cell depends upon the continued presence and functioning of a selectively permeable membrane. If the membrane is altered in any way, this may have an effect on its permeability and therefore the properties of the cell of which it is a part. Irreversible changes in the permeability of the membrane usually lead to the death of the cell. The cell membrane provides a boundary between the cell's inner environment and its surrounding outer environment. It allows different substances to pass through at varying rates, this is described are differentially permeable. It controls things such as sugar concentration, ion concentration and pH levels. If the pH levels were to be affected, the enzymes would not function efficiently thus allowing chemical reactions to take place. Proteins in the membrane vary in size and occurrence. Some penetrate all the way through called intrinsic proteins (transmembrane); some only penetrate half way called extrinsic proteins. Transmembrane proteins have hydrophilic and hydrophobic regions which cause the proteins to align in a specific way in the membrane. Proteins with carbohydrate side chains, called glyco-proteins, act as receptor sites and help the protein to align with other cells. Cholesterol molecules are located in different places in the membrane; they control the fluidity of the membrane. If there are o lot of cholesterol molecules then the membrane will be rigid, less molecules will mean a more fluid membrane. Without the cholesterol molecules, the membrane breaks down and the cell bursts. There are many things that can affect what is transported in and out of the cell: temperature, pH, other chemicals (solvents) ...read more.

15. Record the results for each reading in a table. Justifications: The temperature of the water baths ranges from 10?C to 80?C as I thought it would give a good range of results which would show what happens to the absorbency with an increase in temperature. Filter number 520 is a yellow filter which is the complementary colour of purple. As the colour of the pigment is a mauve/purple colour, it seemed the obvious one to pick as it would not absorb the colour of the solution. I chose a size 5 borer as it was not too narrow and not too wide; it was also easier to fit into the test tubes. The pieces were cut to 2cm in length to ensure that they fit into the test tube horizontally as well as vertically. Two would be put into each test tube as one might not release a lot of pigment. The Bunsen burner has to be removed every so often to prevent the water baths from boiling and exceeding the desired temperature. I chose to do the extremes in temperature the whole way through to see how they varied from the highest to the lowest, as the temperatures in the middle would not vary too much. The samples would be taken every two minutes to get good range of results to allow me to find out what I am looking for. Tweezers would be used to prevent any of the pigment staining the clothes or the skin during the transfer from the sieve to the test tubes. Variables: * The temperature has to be kept at the chosen temperatures to make sure that the results are as accurate as possible, and so that unnecessary damage is not caused to the membrane. Thermometers in each water bath will make checking the temperature a lot easier * The size of the beetroot pieces has to be as similar as possible, therefore using a ruler for measuring the length is essential. ...read more.

This factor is not counted as human error as there is nothing we can do to prevent this from happening. Also if different pieces of beetroot were used, it could affect the results obtained. This could be overcome by using the same beetroot through out the experiment, that way we know that if the pieces are from the same beetroot, then the colouration of the pigment will be similar in all the pieces. If they were from different pieces of beetroot then the intensity of the pigment released may cause inaccuracies to occur. The beetroot may not have rinsed properly therefore the pigment may have leaked out prematurely in effect causing the percentage transmission to be less than would have been otherwise. Rinsing the beetroot thoroughly would make the first reading more accurate. We could prevent this inaccuracy from happening by blotting the beetroot before transferring it into the test tubes. The surface area of the beetroot may also play a part in the accuracy of the results, as varying sizes in area would have produce a varying amount of pigment leakage. The larger the surface area, the more pigment will leak out. This could be due to free hand sectioning. A way to avoid the variation could be to use a device which has cutting utensils at a set distance which would produce pieces that were of equal length. Temperature was another aspect that could have caused results to be inaccurate as the temperature was very hard to keep the same, as it was very hard to stop the fluctuation from occurring. The baths may have been heated too much, or they may have had time to cool down, in effect, affecting the amount of pigment leaking out of the cell due to the increased fluidity of the membrane. Inconsistent stirring could have lead to uneven spread of the pigment, therefore when a sample was taken out for testing; the percentage transmission was greater than would have been otherwise. One way of overcoming this would be to stir regularly to ensure even spread of pigment. ...read more.