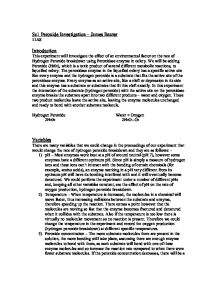 Sc1 Peroxide Investigation - James Baxter 11AS Introduction This experiment will investigate the effect of an environmental factor on the rate of Hydrogen Peroxide breakdown using Peroxidase enzyme in celery. We will be adding Peroxide (H202), which is a toxic product of several different metabolic reactions, to liquefied celery. The peroxidase enzyme in the liquefied celery has a specific active site like every enzyme and the hydrogen peroxide is a substrate that fits the active site of the peroxidase enzyme. Every enzyme as an active site, like a cleft or depression in its side and this enzyme has a substrate or substrates that fit this cleft exactly. In this experiment the interaction of the substrate (hydrogen peroxide) with the active site on the peroxidase enzyme breaks the substrate apart into two different products - water and oxygen. These two product molecules leave the active site, leaving the enzyme molecules unchanged and ready to bond with another substrate molecule. Hydrogen Peroxide Water + Oxygen 2H202 2H2O + O2 Variables There are many variables that we could change in the proceedings of our experiment that would change the rate of hydrogen peroxide breakdown and they are as follows: - 1) pH - Most enzymes work best at a pH of around neutral (pH 7), however some enzymes have a different optimum pH. Since pH is simply a measure of hydrogen ions and these ions can't interact with the bonding of certain chemicals (for example, amino acids), an enzyme working in a pH very different from its optimum pH will have its bonding interfered with and it will eventually become denatured. We could perform the experiment under a number of different pHs and, keeping all other variables constant, see the effect of pH on the rate of oxygen production, hydrogen peroxide breakdown. 2) Temperature - When temperature is increased, the molecules in a chemical will move faster, thus increasing collisions between the substrate and enzyme, therefore speeding up the reaction. ...read more.

I divided the 30ml celery solution into five beakers, each containing 3ml of the liquefied celery. I decided this after using 5 divisions of 5ml celery, which produced a reaction slightly too vigorous to produce reliable results. Therefore I decided to use less celery (only 3ml for each of the 5 experiments instead of 5ml) to produce a reaction more under control to give a more reliable set of results. Even though this means that 15ml of the celery is not used, it gives a more controlled experiment than had we divided the celery into 5 beakers of 5ml or 6ml each and used up all or most of the celery solution. Therefore the amount of celery in each beaker should be small rather than large, if a more controlled experiment and a more reliable set of results are desired. 4) Use a syringe to remove one of the celery solutions from one of the beakers and place it inside the conical flask, or alternatively carefully pour it in so as not to lose any celery solution and thus alter the results. 5) Wash the syringe or take a fresh one, then use it to take one of the peroxide solutions and add it to the celery in the conical flask by squirting it down the side of the conical flask. This is necessary to ensure there is no backsplash of the corrosive peroxide. Place the bung into the conical flask quickly so as not to loose any oxygen. The celery should be of 100% concentration, obtained by liquefying the celery into a pureed form. 6) Start the timer and record the amount of oxygen collected in the gas burette at a constant period of time. I decided to time each experiment for five minutes, and measure the amount of oxygen collected every 30 seconds during those five minutes. I came to this decision based on the rate of oxygen production seen in the pilot practical, where a recoding every 30 seconds for 5 minutes seemed to give reliable results and was not too difficult to record. ...read more.

To get reliable results the experiment should be repeated, making sure that there are no foreign factors, especially pH, affecting the experiment. Evaluation The main error of my experiment was the fact that the pH of the hydrogen peroxide solutions did not remain constant and so there were other variables affecting the experiment. This means although while my first experiment gave inconclusive results as to the relationship between peroxide concentration and oxygen production, it concluded that the pH adversely affects the reaction rate as it becomes more acid. This foreign variable (pH level) could be kept constant by neutralizing it and keeping the pH at a constant level, as performed in the second, controlled experiment, and this would give conclusive results about the relationship between peroxide concentration and rate of oxygen production. The air temperature of the room seemed to increase rapidly throughout the experiment, and this would have affected the results by varying the temperature at reaction and thus adversely affecting the results. This could be kept constant by making sure that no external heat sources are altered throughout the investigation, and that the room temperature is also kept constant. This is important since if more than one variable is affecting the reaction, in this case peroxide concentration, pH and possibly temperature, the results become inconclusive to any one of those variables and so the whole experimental results become invalid. These factors should be investigated separately to avoid this, for instance the peroxide concentration and room temperature could be kept constant while the pH of the solution increased/decreased, to see what effect this has on the rate of oxygen production. Overall the main flaw in my experiment was the fluctuation of pH level which increased as peroxide concentration decreased, thus drawing no conclusive results to my aim. This should be prevented my making sure the pH level remains constant and so results drawn will be conclusive to the relationship between rate of substrate-enzyme reaction and hydrogen peroxide concentration. ...read more.