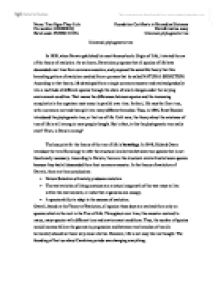 Universal phylogenetic tree In 1859, when Darwin published his most famous book: Origin of Life, it started the era of the theory of evolution. As we know, Darwinism proposes that all species of life have descended over time from common ancestors, and proposed the scientific theory that this branching pattern of evolution resulted from a process that he called NATURAL SELECTION. According to that theory, life developed from a single common ancestor and evolved gradually into a multitude of different species through the chain of small changes under the varying environment condition. That means the differences between species and the increasing complexity in the organism must occur in parallel over time. In short, life must be like a tree, with a common root and then split into many different branches. Thus, in 1866, Ernst Haeckel introduced the phylogenetic tree, or the tree of life. Until now, the theory about the existence of tree of life is still strong in most people thought. But in fact, is this the phylogenetic tree really exist? If not, is Darwin wrong? The key point for the theory of the tree of life is homology. ...read more.

Their tooth evolution was continuing. Approximately 40 - 24 million years ago, in the late Eocene and Oligocene, the species Mesohippus appears suddenly with the back was less arched, longer legs, the snout and face distinctively longer. Mesohippus had 3 toes on its hind and front feet and the 4th front toe was reduced to a vestigial nubbin and still had padded - footed. Soon after Mesohippus, a similar animal called Miohippus arose and their fossil record began to show a variable extra crest on its upper cheek teeth. Came to the Miocene, Miohippus began to split into 3 lines: small pygmy horses (not survive), 3-toed browsers called "anchitheres (they were very successful, spread into the Old World and thrived for tens of millions of years. They retained the small, simple teeth of Miohippus) and a line that changing their form to survive in the grassland which were just beginning to appear, open the era for grass - eater and also evolved the long legs for running in grassland. As the third line of Miohippus in the Miocene, the horse's tooth crown grew out of the gum and became harder to develop the cement layer. ...read more.