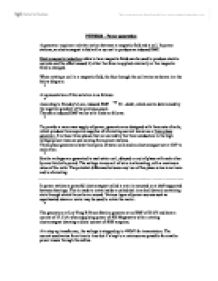 A generator requires a relative motion between a magnetic field and a coil. In power stations, an electromagnet is fed with a current to produce an induced EMF.

Electromagnetic induction refers to how magnetic fields can be used to produce electric currents and the effect caused if, either the force is applied externally or the magnetic field is changed.

When rotating a coil in a magnetic field, the flux through the coil varies as shown in a the below diagram:

A representation of this variation is as follows:

According to Faraday’s Law, induced EMF          E= -do/dt, which can be determined by the negative gradient of the previous graph.

To provide a more even supply of power, generators are designed with three sets of coils, which produce three separate supplies of alternating current known as a three-phase generator. It is these three phases that are carried by the three conductors in the high voltage power lines we see coming from power stations.

Three-phase generators have three pairs of stator coils and an electromagnet set at 120º to each other.

AC can be readily switched by circuit breakers at any voltage, whereas switching of DC is only possible at the lowest voltages. AC motors and other electrical appliances are cheaper, simpler and more reliable.The frequency can be very precisely controlled and so AC is useful in motors which require accurate speed e.g. clocks, taper recorders, record players.AC can be easily and cheaply transformed up from generator voltages (typically 11-22kV) to main transmission voltages and down again to lower voltages as required.

The transmission system is required to transmit the electrical power generated in power stations to industrial, commercial and domestic customers.

Voltage is stepped-up by transformers

A transformer transforms electrical energy from one circuit to another by electromagnetic induction between two coils. The step-up transformer immediately increases the voltage to 400kV for transmission. In a step-up transformer, the number of secondary turns exceeds that of the primary coil and therefore the output voltage is greater than the input voltage.

The electrical power is given by, P=VI, where P = Power (P)

Some of the power being fed into a transmission line is wasted before it reaches the consumer.

It is important that SEC accurately forecasts demand for electricity because this way the public knows when to use electrical appliances at the correct time. If this is done incorrectly there could be many problems at power stations.

The fluctuating demand is met by Victoria’s hydro-electric plant and Snowy Mountains entitlement (as Victoria is entitled to one-third of production) as well as the gas turbine stations at Jeeralong in the Latrobe Valley and at Newport.