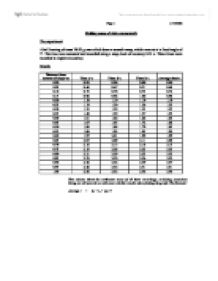 A ball bearing of mass 28.82 g was rolled down a smooth ramp, which was set at a fixed angle of 5˚. The time was measured and recorded using a stop clock of accuracy 0.01 s. Three times were recorded to improve accuracy.

The graph above tells us that as the distance of the ball bearing from the bottom of the slope increases, the time it takes for the ball to reach the bottom will also increase. However, we can also see that the gradient of the graph changes constantly, indicating that this is a non-linear relationship. At the start of the graph, there is a gradient of 9.6 s m-1, but when the distance is approximately 0.8 m, the gradient becomes significantly less at 1.5 s m-1.

As the distance increases, the gradient of the graph decreases. This suggests that the average speed of the ball bearing is increasing.

This would be due to the fact that with a higher distance, there is more time for gravity to accelerate the ball bearing.

The graph shows a typical square relationship, y = k√x - where

The weight of the ball acts directly downwards though, so this value is not the true force. However, we can say that the acceleration of the ball bearing would remain unchanged at all values of distance because the weight is constant.

We can work out the equation of this graph by substituting any coordinate, in which the line of best fit passes through, into the general square equation:

Example; if the ball bearing was 0.40 m from the bottom of the slope, then according to my equation, the time taken should be 1.61 s.

Compared to the true value, there is only a difference of 0.02 s, which illustrates how accurate the equation can be. Although calculations for the other values of distance are not shown in this report, they have been tested and show the same concept. Also, the fact that distance and time can be linked together via an equation is further proof that there is a strong relationship between the two variables.

In order to analyse this graph further though, we would need to convert it into a straight line graph.

Repeatedly constantly throughout this report is the influence of human systematic error on the accuracy of results. The most significant part of human error can be seen when we try working out the acceleration of the ball bearing at the various distances from bottom of slope. The response time of a human can delay the starting and stopping of the timer of stopwatch. This time delay would not be constant, leading to error and anomalous results. The problems can be seen more clearly when the distance from bottom of slope is very small. It is very difficult to start and stop the timer accurately, when the difference between the ball bearing starting to move and reaching the bottom of slope is less than a second.

As suggested earlier, the most probable method of improving the experiment would be to use electronic devices such as a light gate. As well as containing less systematic error, this would improve the reliability of results because there will be more consistency in the rate of error as well.