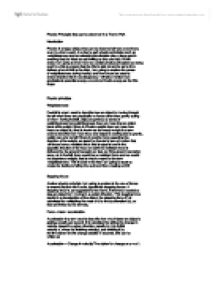 Physics Principles that can be observed in a Theme Park

Physics is a large subject that can be observed almost everywhere,
even in a theme park, in a theme park physics principles such as
weightlessness and acceleration/deceleration play a large part in
ensuring that the rides are as thrilling as they are safe. In this
essay I am going to show how two certain physics principles are being
used in a ride to ensure that the ride is safe but at the same time
delivers a lot of thrill to the rider. I am going to explore the sense
of weightlessness during freefall, and how forces are used to
ensure that the ride is not dangerous, I will also mention how
gravitational potential energy converts to kinetic energy as the ride
drops.

Freefall is a term used to describe how an object is moving through
the air when there are practically no forces other than gravity acting
on them. During freefall, object experience a sense of
weightlessness but weightlessness does not mean that an object
loses all its weight. Since in Physics weight does not mean how
heavy an object is, (that is known as the mass) weight is a term
used to describe how much force and object is exerting due to gravity,
weight can only be felt if there is another force opposing the
direction of the weight, as stated by Newton’s laws of motion that

For this coursework, I visited a theme park called Thorpe Park, an
amusement park full of thrilling rides that use physics to create the
maximum thrill whilst still keeping the ride safe and keeping the
passengers out of harms way. The ride I am going to study is called
Detonator, it uses both the physics principles I explained above,
below is a picture of the ride, it involves pulling a platform of 14
seats up to a certain height, before dropping the platform into
freefall towards the ground and stopping the ride just in time.

calculations is the force of friction which could have lowered the
overall speed of the ride since not all the gravitational potential
energy (stored energy an object has due to gravity) would have been
converted to kinetic energy (movement energy an object has), which are
other physics principles I could have analysed and looked at when
studying the ride.

The same physics principles could be used to make a larger or
different version of the ride. An idea would be that people are placed
in seats in a transparent plastic capsules, which is then dropped down
a tube onto a cushion type material to cushion the blow, below is a
diagram of how it would look, the material would have to be carefully
chosen in order to make sure it is soft enough and compresses enough
to absorb the entire impact, in order to make the ride twice as fast,
the ride would have to be more than eight times as high because if we
re-arrange the equation for kinetic energy and gravitational
potential, then

In order to double the velocity, we must multiply be two on both sides

So the height has to be 8 times larger in order to double the velocity
And the cushion would have to have a even larger stopping force to
make sure the person is stopped in time, but it would have to dent in
a lot in order to avoid causing any damage to the passenger or the
capsule
...read more.